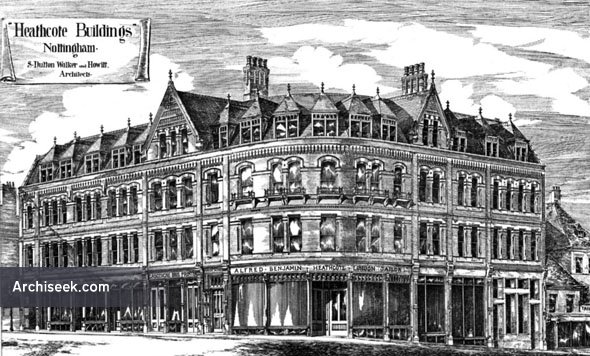 “This block of buildings has recently been erected at the angle of a new street, recently opened in a populous portion of the borough of Nottingham, and which has been named Heathcote street, after an inventive gentleman who made sundry improvements in the manufacture of lace and other articles. The block consists, on the ground floor, of eight sale shops and other business premises, and above are warehouse let off for the lace trade, which is the chief industry of this thriving town. The main supports of “the building are greenmoor stone and cast iron, the superstructure is the best Nottingham red brick, with Hollington stone facings. Terra-cotta has been used in panels, gables, and other places. The trefoil headed panels above the plate glass of ground floor are filled in with highly-ton?d stained glass in lead geometrical patterns. The whole has been erected from designs by, and under the superintendence of, Messrs. S. Button Walker and Howitt, of Nottingham, architects, by Mr. Henry Vickers, of Nottingham, con- tractor.” Perspective view published in The Building News, December 9th 1881.