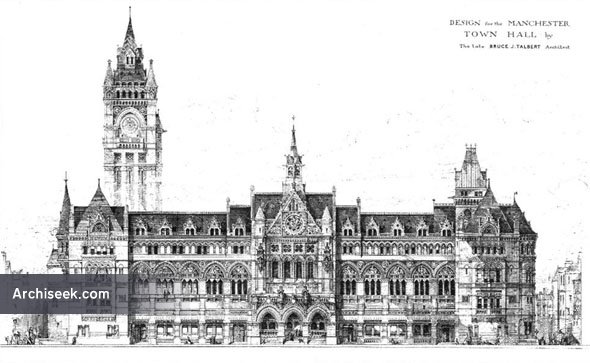 A selection of the 136 entries into a competition to design a new town hall for Manchester. The competition was won by Alfred Waterhouse, then at the height of his career, and is acknowledged as one of his most important works.

From The Building News: “It is very unfortunate for the sake of criticism that the selected architects in the Manchester competition should have sent their last drawings instead of their first sketches, for the unfortunate men who exhibit their “sketches ” are manifestly at a disadvantage in measuring with those who exhibit richly coloured perspectives in frames 6ft. or 7ft. long. Of those who were placed by the adjudicator in the first competition five exhibit not their original designs, but their finished drawings — Messrs. Waterhouse, T. H. Wyatt, Scott, Worthington, and Speakman and Charlesworth. Amongst those who were never, so to speak, in the running, we have the designs of Messrs. Godwin (E. W.) and Crisp, Prichard, Roger Smith (scratched), Lamb, Ridge, Talbert, Rogers and Codd, and Dunk, the influence which the designs for the Law Courts has had upon some of these designs is very remarkable, notably so in the cases of Mr. Worthington and Messrs. Speakman and Charlesworth, who have helped themselves bountifully from Mr. Surges and Mr. Scott. Indeed, Mr. Burges’s thirteenth century translation of the dormer windows of the Hotel de Cluny and the Chateau de Josselin has been hailed as a discovery, and must be regarded as a great success. “