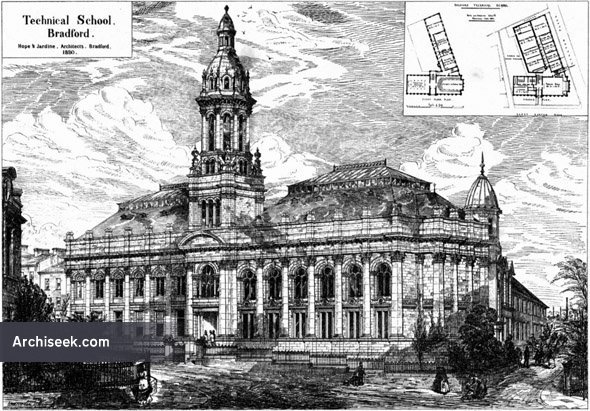 Perspective View including ground & 1st floor plans published in The Building News, June 18th 1880. Bradford Mechanics’ Institute was founded in 1832, acquired a School of Design in 1848, a School of Building in 1867, and a Weaving School (Bradford Technical School) in 1878. The first building for the new Bradford Technical School was opened in 1882. Four departments were established: Textiles, Art and Design, Engineering, and Chemistry and Dyeing. Shortly after the School opened it was re-named Bradford Technical College. Now known as Bradford College there was a proposal to merge with Bradford University but that was called off in 2003. It is now a further and higher education college leading up to postgraduate level validated by Leeds Metropolitan University