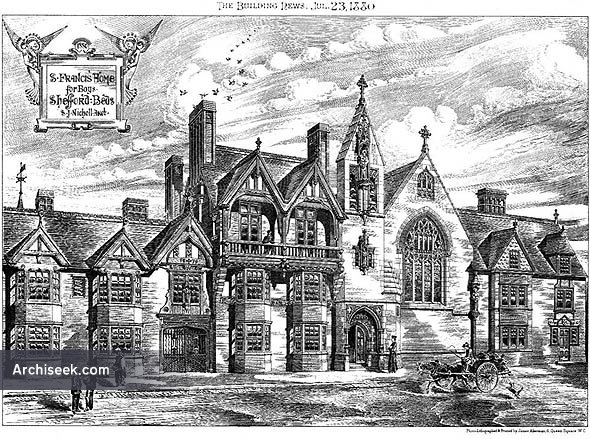 “The group of buildings in this view consists of the Church of St. George, -with the Presbytery, and the entrance gateway, infirmary, and other portions of the street-front of the Home for Boys. St. Francis Home was founded in 1S70 ; it is now providing for fifty orphans and destitute boys, principally from the Roman Catholic diocese of Northampton, ‘and, when completed, will accommodate about eighty. It is under the charge of the very Rev. Canon Collis. The regular plan of the street-front has been necessitated by the position of old buildings partially retained, and the form and style have been considerably influenced by the desire to give useful employment to the boys, who, under the direction of the technical instructor, have executed the whole of the carpenter’s and joiner s work in the building. The small Chapel of the mission was erected about a century since in the garden at the back of the Priest’s residence, the approach to it being by a narrow passage between two houses ; the Church is now to be erected with a frontage to the street, as in the view, the Chapel being preserved to serve as sacristies, &c. A view of the dormitory, schoolroom, and of the old chapel, as seen from the playground, was given in the Building News of July 26th, 1878; of the old and new buildings on October 6th, 1876; and a third, of the interior of the church, on May 28th, 187.5. The architect of the whole is Mr. S. J. Nicholls, of 1, Caversham-road, London, N.W.”