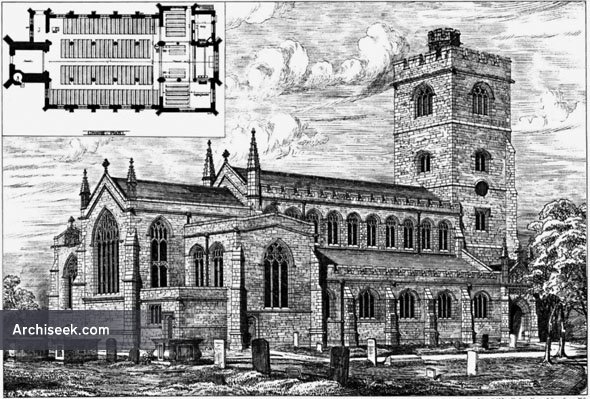 Perspective View including ground plan published in The Building News, September 2nd 1881. “The parish church of Fulham, dedicated to All Saints, had been so often added to and altered that, as it existed previous to the late rebuilding, scarcely a vestige remained of the original church except the tower. In pulling down nothing was discovered of any date apparently earlier than the latter part of the fourteenth or the beginning of the fifteenth century. The tower, which was restored by Mr. Godwin about forty years ago, remains untouched. In consequence of greater frequency of abnormally high tides, which nut only come into the churchyard but have flooded the church itself more than once during the last few years, it became absolutely necessary to raise the floors at least three feet, and it was then determined to undertake the entire rebuilding. Some windows which formed part of a scheme for rebuilding, a very small portion of which only was carried out many years ago, had to be preserved and incorporated into the now design, with which they do not entirely harmonise. The style of the new building is Perpendicular, the materials used being Kentish rag with Bath- stone dressings. The roofs are of pitch-pine ; the seats, with the exception of those in the chancel, which are of oak, are of the same material. The church has been designed to have all the windows filled with stained-glass for which a scheme has been prepared, and with a view to future coloured decoration. The contractors were Messrs. Goddard, of Famham. Mr. J. Vaughan was clerk of tho works. The carving was executed by Mr. Earp. The stained glass already executed is chiefly by Messrs. Heaton, Butler, and Payne.”