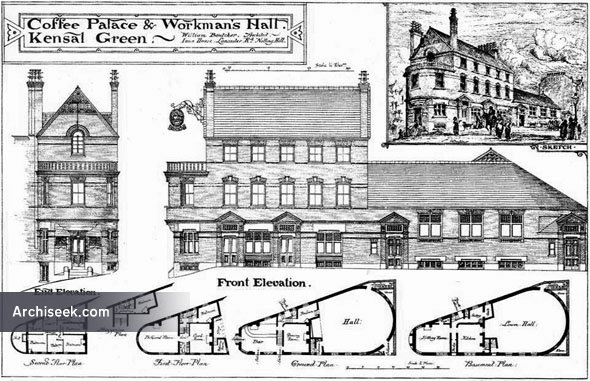 “Until within the last few years two farmhouses alone stood amidst the green pastures south of the Great Western Railway at Kensal Green. Narrow bridges, with gates across them, spanned the railway and the more northernly canal. A road branching from the Harrow-road at Paddington through quaintly named cottages to what was then the Great Western gas-works. A couple of footpaths traversed the farms northwards, from Notting-hill to the cemetery. The farms have now been displaced by a vast network of new streets ; the fields has been turned into building-sites ; the footways have been diverted and converted into wide roads full of bustle and activity ; and one of the finest thorougfares in the metropolis, which begins at the main Bayswater-road and passes over the crown of Notting-hill, has been continued northwards to Kensal Green and the Harrow- road. The old narrow bridge over the Great Western Railway has been replaced by a new one of appropriate size and character. The corresponding one over the canal, some 300 yards further north, has been most wisely condemned, and a new iron structure 40ft. wide, designed by Mr. Henry Vignolles, will, in a few months, be begun. The old Plough-lane will be widened, and thus the northern outlet of Kensington parish will bo completed. Between these two bridges, opposite the gas-works, at the highest spot in the whole parish and for miles around, a strip of ground, with a frontage of some 200 yards to the main road, has for years remained vacant. The district being one occupied almost entirely by the labouring classes, the idea was started of erecting there a building devoted to the reasonable requirements of their leisure hours, and a series of suitable dwellings for them with all the latest sanitary improvements. The site was purchased for the purpose by a gentleman in the vicinity, and it is now being cleared for the proposed buildings. The Coffee Palace and Hall, shown in our engraving, will be built at the point directly opposite the new bridge over the canal. The arrangement of the plan was governed to a great extent by the peculiar shape of the site and by the difference in the levels the roadway falling considerably from the front elevation to the rear. The difhiculties have, however, been fairly overcome, and, in some cases, utilised. The plans at the bottom of the page explain themselves. The materials used on the fronts will be carved and molded.” Perspective View, Elevations & Plans published in The Building News, August 20th 1880.