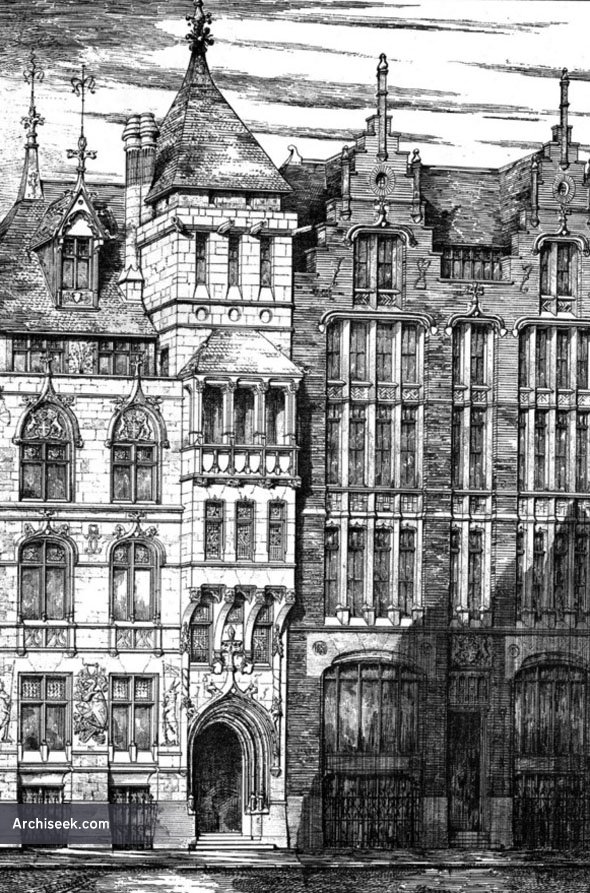 Perspective of facade published in The Building News, July 2nd 1875. The Curriers’ Company dates from 1272 when the Mistery of Curriers became a trade association. In the 14th century the Curriers constituted themselves into a guild and religious fraternity in association with the Carmelite Friars in Fleet Street. In 1415 they obtained their ordinances by an act of Common Council: these gave them full autonomy. By 1580 the Guild of Curriers was recognised as a Livery Company of the City of London. The Company became armigerous in 1583. However, not until 1605 did King James I grant the Curriers their first Charter of Incorporation. The Company ranks 29th in the order of precedence of Livery Companies of the City of London.

Over the ensuing 4 centuries, the Company built no less than 6 Curriers’ Halls in the City, the last one being constructed in 1876. Unfortunately, the difficult economic circumstances of the early 1920s forced the Company to sell its 6th and last Hall on London Wall. After the sale it moved in with its longstanding trade and Livery partner, the Worshipful Company of Cordwainers. Along with many other Livery Halls, Cordwainers’ Hall in Cannon Street was itself destroyed by enemy action in 1941 and since then the Curriers’ have been without their own Hall. However, from 1942 onwards the Company has been housed at Tallow Chandlers’ Hall, where it holds its Court meetings.