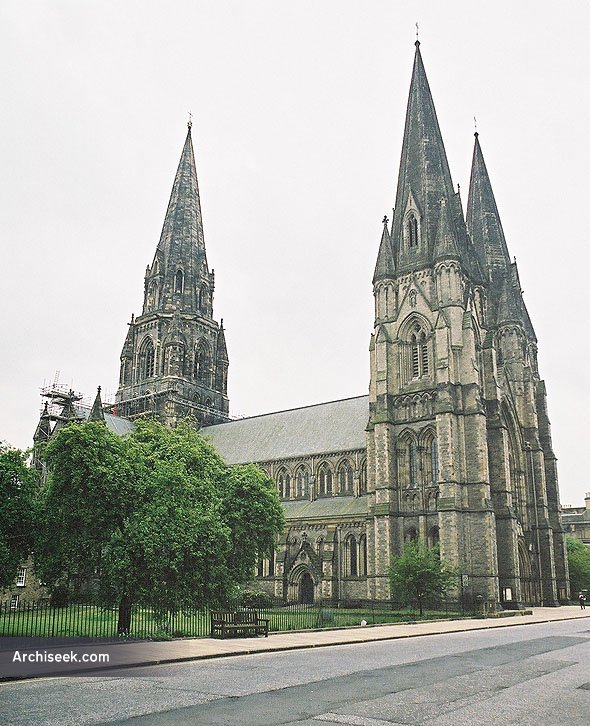 After an architectural competition, this design of Sir George Gilbert Scott was chosen from six others. One of three designs by Sir George Gilbert Scott, for a church with a single central tower and spire, was selected; however, it is worth noting a three-spired submission by Alexander Ross was publicly popular. Scott was then asked to add two additional towers to his design. Oddly the cathedral terminates a vista down Melville Street but it is the rear of the Cathedral that the viewer sees and not the main front. The church was consecrated in 1879 but the two spires on the main front were not completed until during the First World War. The building was largely funded by two sisters Babara and Mary Walker, after whom the twin spires are named.

The tympanum over the lintel of the West Door depicts Christ holding the keys with John the Baptist on the left and St Peter on the right.

The building is a very visible Edinburgh landmark but is architecturally unsatisfying externally. The building seems quite heavy without the sense of great height that a gothic cathedral should have. This is down to the twin spires which had quite a large cross section but are not quite high enough proportionally. The central spire is 270ft. tall. The interior is much happier.

The photograph above shows a clever conceit used by Sir George Gilbert Scott. The vaulting at the east end gives the effect of a graceful apse above the East Window, though the building is in fact rectangular. The floor is of Sicilian marble and encaustic tiles and contains images of fish, gryphons, birds, lions and deers. The Altar Cross has the Byzantine feature called crux in cruce, namely one cross superimposed upon another. The stones are Scottish topaz or Cairngorms and at the foot of the Cross are wheat and grapes. The Reredos was designed by John Oldrid Scott and the central panel is of the finest white Carrara marble with pillars of porphyry and Verona marble. The Statues in the niches are of St Margaret of Scotland and St Columba.

The nave and aisles of the cathedral are dark and sombre, mostly lit by articifical light. The interior is generally more pleasing than the exterior, the polychromy of the decoration and ironwork relieving the gloom of the sandstone.