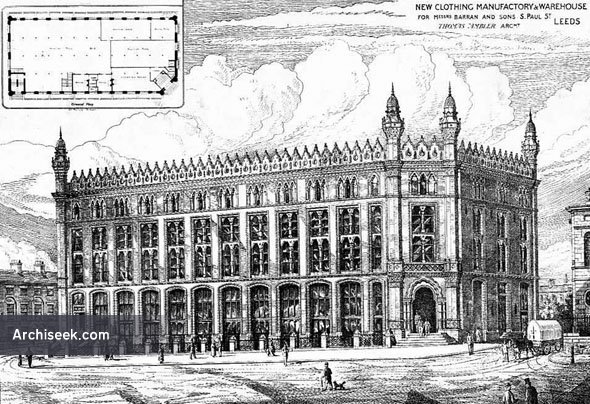 “The site on which this building stands is situated on the south side of Park-square, and was formerly occupied by a terrace of nine good houses, which had to be taken down. The building is in the Moorish style of architecture, and was designed by Mr. Thomas Ambler, architect, Leeds. It is built of selected hand- made pressed bricks, and red and buff terra cotta is used for the dressings. The four sides of the building are treated uniformly with the front, the north-west angle turret being used as a chimney to carry off the vitiated atmosphere from the gas engines as well as from the beating apparatus. The basement floor is used as a cutting-room, in which are a number of cutting-machines with endless knives, driven by power, the cloth being folded in layers, some- times to the extent of one hundred and forty or fifty. The pattern of the garment is marked on the top, and the whole are thus passed quickly through the machine. There are three of Crossley’s patent silent gas-engines, each of 8 h.-p. One engine consumes about 8,100 cubic feet of gas per week. Two of them drive all the cutting machines, the hoist, and all the sewing-machines ; the other is held as a reserve. White glazed bricks are used on the basement and third floors. On the ground floor are counting-house, two private offices, with lavatory and w.c’s, packing-room, receiving-room, and warehouse-room for cloth. The first floor has no subdivisions, and is used entirely as a stock-room for made-up garments. The second floor is subdivided so as to provide in one-half of it a large dining-room, cloak-room, dressing- room, with lavatories and w.c’s for the use of the females employed on the premises. The other half is used as a work-room. The third floor is used as a sewing-machine-room, with accommodation for upwards of 200 sewing machines, which are worked on an entirely new system, the patent of Mr. John Barran, jun. The roof is divided into four spans, the north side of each being glazed with rough plate- glass. The floors are formed with rolled-iron transverse beams, supporting llin. x 4in., dressed longitudinal joists, 3ft. centres, and the whole covered with 3in. planks with iron tongues, dressed on the under side, stained, and varnishid. The office walls are lined with pitch- pine framing, and the ceilings have moulded ribs and panels filled in with narrow V-jointed boards. All the joiner’s work is of pitch pine, stained and varnished. The building is heated by hot water. The terra-cotta work was supplied by Messrs. Doulton and Co., of London. In the workpeople’s staircase (which is fireproof) is carried up a Gin. water main, and on each landing is provided a double hydrant with valves and hose pipes. The following were the contractors — viz., brickwork, Messrs. Bentley and Bum ; joiner and carpenter, Mr. John Tomlinson ; plastering, Mr. John Senior ; painting, Messrs. Wood and Son; slating, Messrs. Watson, Wormald, and Co. ; plumbing, Mr. F. Johnson, all of Leeds.”