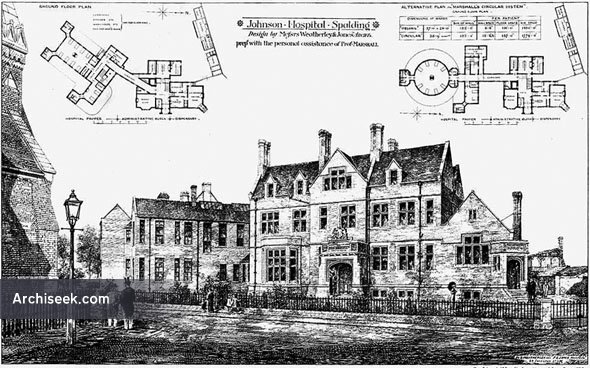 Perspective View from design submission for architecture competition of hospital published in The Building News, September 5th 1879. “About ninety sets of drawings were sent in last March for the Johnson Hospital. The one we now publish is by Messrs. Weatherley and Jones, 20, Cockspur-street, S.W., and was selected with 21 others for further consideration. This design, with the alternative plans on “Marshall’s circular system,” attracted much attention and was greatly approved by the medical staff. We understand the authors received valuable personal advice from Professor Marshall, of University College. A hospital on the “circular system” is being erected at Antwerp ; some similar ones exist in America, but up to the present time none have been erected in England. The printed conditions restricted the outlay to £4,000 ; after considerable delay the tender for the accepted design amounts to £10,000. A Mr. Wheeler, C.E., of Boston, was called in to assist the trustees in making their final award ; of the fifteen trustees none were medical men.”