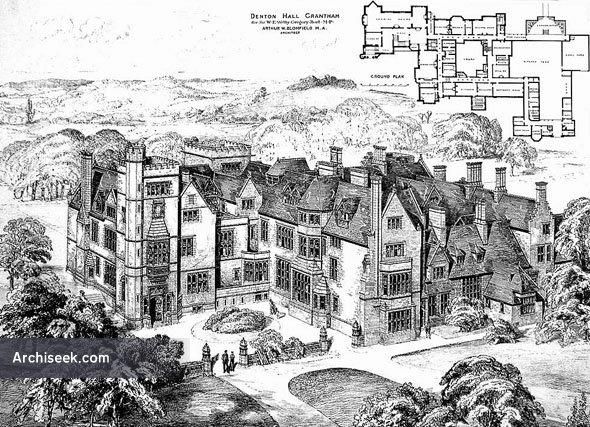 The original Denton Manor was a stone mansion, but nearly all rebuilt in 1816-17. In 1842, The Welby family took over and between 1879 and 83 rebuilt the house to a design by Arthur W. Blomfield. After a major fire a great deal of the manor was destroyed, but the family restored it to its former glory.

From The Building News, October 10 1879: “The drawing from which the double-page illustration of this important mansion published herewith was taken, was one of the most conspicuous drawings shown this year at the Royal Academy Exhibition. The house is in course of erection for Sir W.E. Welby Gregory, Bart., J.P., from the designs, and under the superintendence of Mr. Arthur W. Blomfield, M.A., architect, of Montague-place, The plan of the ground-floor which we publish with the view shows the building to be of an extensive and complete character, the planning of the several departments being exceedingly well managed. Owing to the absence of Mr. Blomfield from town, we are not able to give any detailed particulars of the building. ”

But like so many stately homes in the area, the upkeep became beyond the family’s means and in 1938 it was demolished. All that is left of Denton Manor today is the gatehouse.