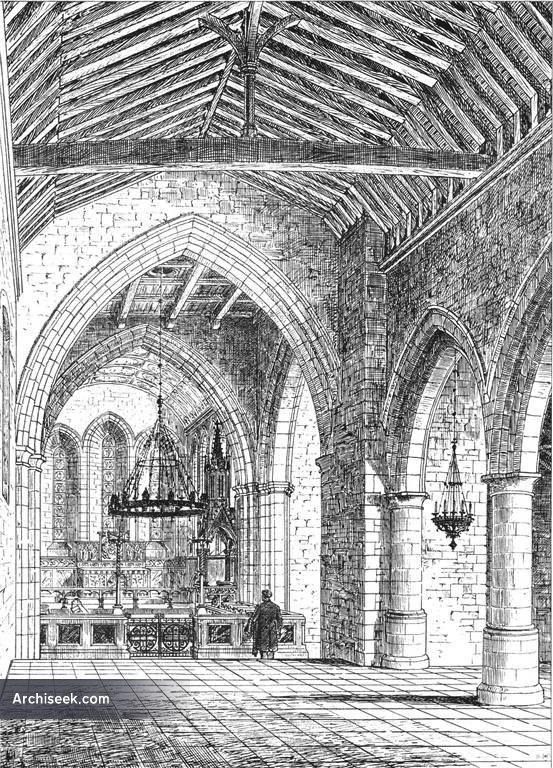 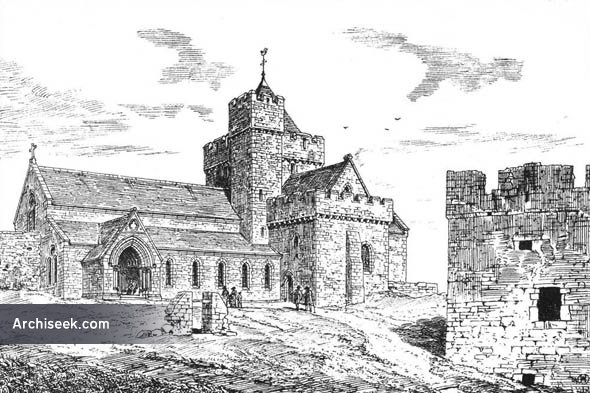 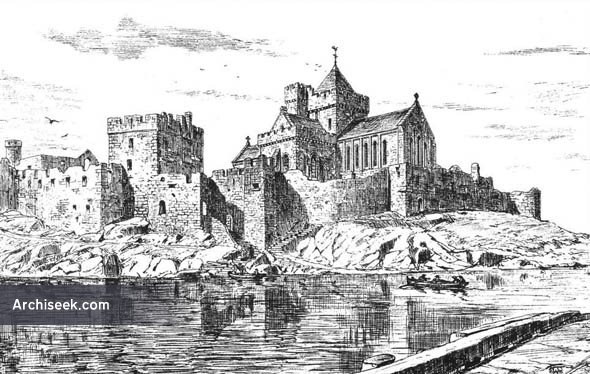 Views of intended restoration from the S.W & S.E. with interior view as published in The Building News, July 4th 1879. Never completed, as it was decided to construct a new cathedral instead, which was built 1879-84.

“The Cathedral of St. Germain’s, in former days the actual Cathedral of the Diocese of Sodor and Man, is situated on an island of about 5 acres in extent at the entrance to Peel Harbour, and is connected with the mainland by a modem causeway. This small island is entirely surrounded by fortifications, probably erected during the fifteenth century. Besides the cathedral there is, within the walls, a roofless building of very early date, known as the Church of St. Patrick, and, beside it. a round tower similar to those in Ireland and Scotland ; also the remains of the residence of the Earls of Derby, once the Lords of Man, from whose hands the sovereignty of the island passed by marriage into the Athol family, who sold their rights to the Imperial Government at the end of last century. The oldest part of the cathedral is the choir, which was erected by Bishop Simon, 1229, or thereabouts. The other parts are of a much later character. The cathedral consists of the choir, with crypt under it, a central tower, north and south transepts, and a nave with south aisle. With the exception of the foundations the south aisle is entirely gone. The other parts arc fairly complete, but the hewn stone dressings are much decayed, chiefly from their not having been laid on their natural bed. Two years ago considerable repairs were made to the arches supporting the central tower and some other portions of the work where it was found to be in a shaky condition. As the diocese has at present no cathedral, His Excellency the Lieutenant-Governor, H. B. Loch, Esq., assisted by the bishop and a committee of Manx gentlemen are making exertions to raise the necessary funds of £10,000 to put the whole building into a proper state of repair, and restore it once more to its original purpose. Mr. E. Anderson, of Edinburgh, is the architect. The drawings we illustrate have been being in this year’s exhibition of the Royal Scottish Academy.”

1879 Architecture of the Isle of Man cathedrals Robert Rowand Anderson