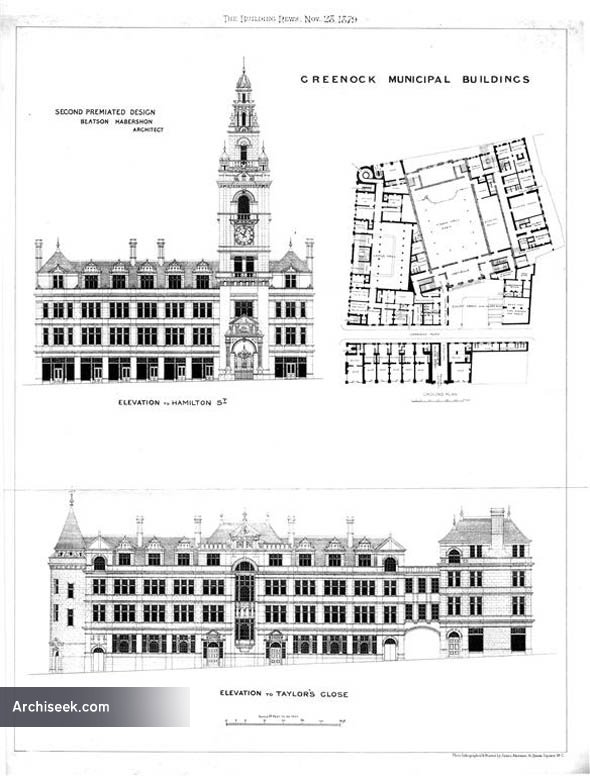 “The second premium was awarded to the design illustrated by Mr. Charles Barry, the architectural adjudicator, out of 50 designs. The existing town-hall and council-chamber submitted occupy the centre of the ground on the north side ; and in this design the police-offices are placed to the east, the collector’s department to the west, and the principal municipal offices to the south of the existing building, this being the arrangement suggested in the instructions. The whole of the offices have internal communication with each other, and with the existing council-chamber, and new and commodious staircases are provided to
the town-hall. In order to limit the expenditure to the stipulated sum of £80,000, as little alteration as possible is made to the present town-hall, the existing saloon and committee- rooms being retained. In the police department, the offices frequented by the public, as also the police muster-room and offices connected with it, are almost of necessity placed on the ground- floor, the police-court on the first-floor, and cells at the top of the building, lifts being provided to these latter, thus bringing them into communication with the private entrance and with the police-court ; the captain’s and record clerk’s offices are placed in immediate communication with the police-court, and at the same time with the council-chamber and town clerk’s offices. The magistrates would enter from the principal entrance in Hamilton-street. The principal entrance, which serves for both the town-hall and municipal offices, is emphasised by the clock-tower in Hamilton-street, the remainder of ground-floor towards that street being occupied by shops, according to the instructions. The first-floor of this block contains the committeerooms, town clerk’s offices, and provost’s room, these latter being in immediate communication with the council-chamber already existing. The design was submitted under the motto ‘Omega’ by Mr. Beatson Habershon, architect, of Roseneath, Ealing. “