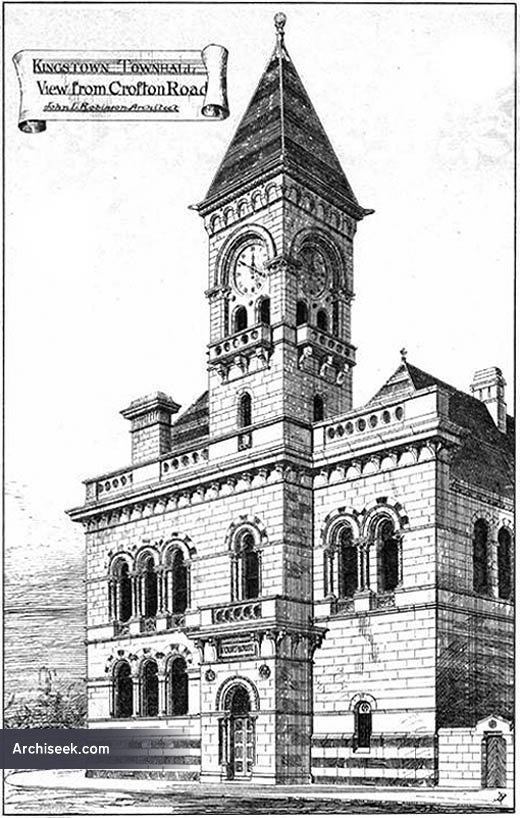 Now part of the larger Dún Laoghaire-Rathdown County Offices, the former Town Hall and Market House was a multipurpose building containing a Courthouse, trade and administration facilities for the Borough. It was designed as the result of a competition in a Lombardo-Romanesque reminiscent of some of the work of Deane & Woodward.

The campanile is one of the defining features of the town when approached from the sea. Even today, the outline of Dun Laoghaire is very much one of spires and towers, all built by the Victorians and reflecting the wealth and confidence of the Borough during the 19th century. 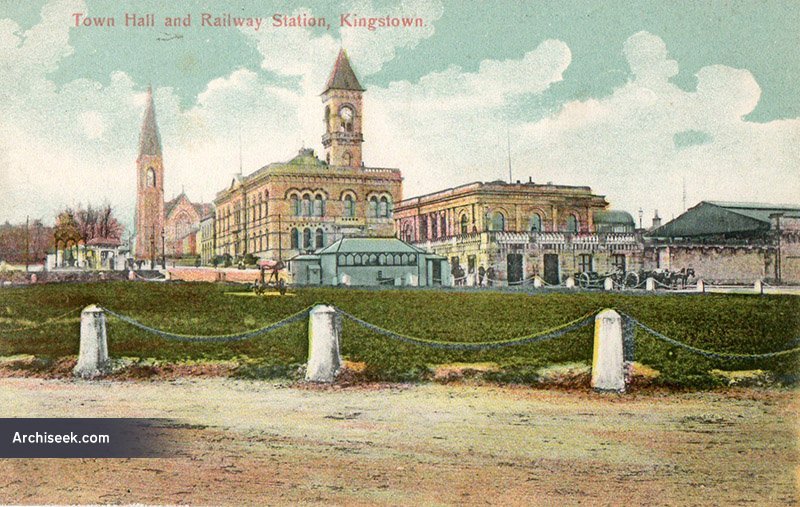 Described in The Building News, July 23 1880: “THE new Town-hall, at Kingstown, opened on Tuesday, contains municipal offices, a fine public hall, and a commodious courthouse, where the county chairman still sit periodically, together with accommodation for the holding of the police-court. So long ago as 1866 the Town Commissioners, feeling the want of such accommodation as that which the new building provides, advertised for plans and specifications, but the difficulties which were thrown in the way of procuring a suitable site caused the scheme to lapse for a time. In 1874 it was revived, and in August of that year, the difficulties with regard to the site having been obviated, the plans sent in by Mr. J. Robinson, 198, Great Brunswick-street, Dublin, were selected, and tenders advertised for. The amount of the contracts and extras was nearly £14,000, but it is estimated that the entire building when furnished will cost at least £16,000. The architecture is after the Italian style.

The main frontage is on the Royal Marine road, where the facade measures 130″ft. The main entrance is situate in the centre of this front. Passing through the massive doorway, the hall, 16ft. wide by 22ft. long, is reached. The bottom story, 16ft. 2in. high, contains the courthouse, which is 39ft. by 30ft., with rooms for witnesses, barristers’ room, clerk of the peace’s offices, the jury-room, the judges* retiring room, closets, lavatory, &c. On the left-hand side of the main entrance, on the same story, are offices for the town clerk, the town surveyor, the rate collector, and the sanitary inspector. The next story is 22ft. high. “It is approached by a grand staircase, and contains the assembly-room, a fine lofty apartment, 7Gft. Gin. long by 41ft. 6in. wide, moulded roof and cornices. The interior fittings of the assembly room will consist of a platform of pitch-pine and American walnut for the accommodation of performers. The boardroom, in which the town commissioners will hold their meetings, is also situated on the second story. Its size” is 30ft. by 39ft. The walls are covered to a height of 6ft. with a panelling of pitch- pine and American walnut, richly moulded. The furniture of the boardroom has been designed by the architect, and will be of massive oak in keeping with the rest of the building. The assembly-room will be devoted to public meetings, concerts, and entertainments. The second story will contain, in addition to the rooms mentioned, the town clerk’s office, a commissioners’ retiring-room, and some;clerks’ apartments. The height of the building is 50ft. from the floor balustrade. A tower 120ft. high surmounts the courthouse entrance in Crofton-road.”