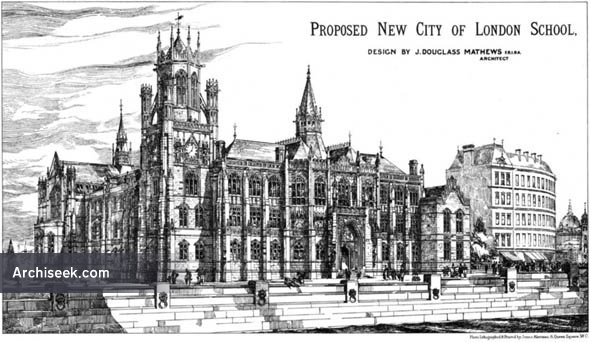 Published finalist in design competition to design a new building for the City of London School. “Another design for these schools, illustrated this week, was submitted under the motto, “Our Boys.” The schools being founded by John Carpenter, in 1440, determined the author to adopt the style of architecture revalent at this period, and illustrated by King’s College, Cambridge, and Eton College, both of which were founded at the same time. In plan, the buildings surround an internal quadrangle, the great hall being placed at the north-west end, and abutting on the proposed new street. Entering from the Embankment, a vestibule leads on the ground-floor to a large assembly-hall, which gives access on the right to the porter’s and secretaries’ offices, and on the left to waiting-room, library, and head-master’s room, under the tower, which communicates with his class-room. There are also entrances, on eachhand, to the corridors, from which open out the class- rooms and masters’ common room. The great hall forms the end of the quadrangle, with the dining-hall, on the opposite side of the corridor, at the end. The lecture-hall occupies the centre of the Embankment-front, on the first and second floors, and communicates, through the laboratory and best apparatus room, to the chemical class-room, which is lighted on three sides, with an open roof. A drawing class-room is provided on the second floor. The class-rooms are placed on each side of the quadrangle on the two upper floors. There are three staircases ; at the foot of each, in the basement, are lavatories communicating with latrines. Almost the whole of the basement, except under the front portion, is devoted to a covered playground, and a part of the quadrangle, below the ground-floor windows, is roofed as a covered gymnasium, and the remainder of the site, about 100ft. in depth, is left as an open playground. The estimated cost of the building is £57,500. The objects sought to be attained in the design were the division of the buildings for the purposes of classification and supervision, ample light and through ventilation to all rooms, and easy circulation by means of direct and wide corridors ; an imposing great hall, convenient of access, and an architectural building worthy of the site. The architect is Mr.J. Douglass Mathews, F.E.I. B. A., of Cloak-lane, assisted by Mr. J. S. Quitter. “