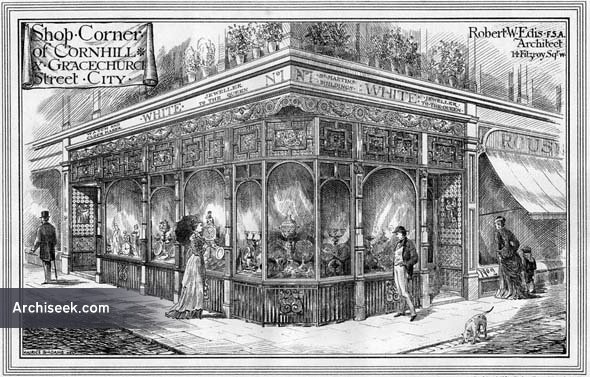 Published in The Building News, August 16th 1878. “We illustrate this week a small shop-front which has lately been completed at the corner of Gracechurch-street and Cornhill, for Mrs. White, the jeweller. The front has been specially designed so as to suit the purposes of the particular trade for which it is used, in which the lower portion of the window space is only practically of real value. The upper part of the front has, therefore, been filled with ornamental glass, which adds to the general effect. The whole of the shop-has been fitted up in character with the front, from the designs and under the superintendence of Mr. Robert W. Edis, P.S.A., architect, of Fitzroy-square. At present the corner front is only completed, but the drawing shows a small additional frontage in Gracechurch-street, which it was proposed at one time to include. “