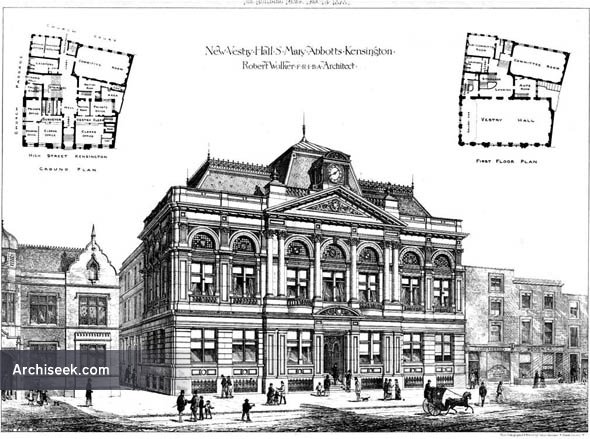 “We give a perspective view and ground and first-floor plans of this building, now in course of erection from designs and under the superintendence of Mr. Robert Walker, F.R.I.BA., architect, of 10, King’s Arois-yard, Moorgate-street, London. The foundation stone of the new building was laid by Lord Kensington on Thursday, December 12th. The principal entrance to the building is in the centre from High-street, Kensington, but there is also a separate entrance to the large hall from Church-passage at the side, and back entrance for the housekeeper, inspectors, &c., from Church-court in the rear. The front righthand portion of the ground floor is devoted to the vestry clerk’s department, and comprises vestry clerk’s public and private office, accountant’s office, waiting-room, and strong-room for daily use ; a separate stairs leads to the basement under same, in which are provided large fireproof rooms and spare offices. The surveyor’s department is on the opposite side, and comprises general office, drawing office, surveyor’s private room and room for papers, &c., and a separate fireproof room is also situated in the basement under these offices. The medical officer’s and sanitary inspector’s offices are placed in the rear ot building, and the large committee-room, is also in the rear, next Church-court, but entered from the central hall ; a separate waiting-room and lavatory is connected with this. The first floor comprises the vestry hall, 92ft. long x 45ft. 6in. wide, entered from the grand stair- case ; at the east end is the platform, and a gallery is placed at the west end, approached by a separate staircase and entrance from Church-passage. The vestry hall is 32ft. high ; adjoining the east end is the anteroom and separate staircase from ground floor to plat- form. A second large committee-room, 56ft. x 2Oft., is placed over the one below, and on the opposite side of the staircase is a sub-committee- oom. The basement is used as spare offices, kitchen for housekeeper, fireproof rooms, lavatories, &c. The housekeeper’s living and bed- rooms are on the second floor at the north-west angle ot the building, and a laboratory for the analyst is also provided on this floor. The contract is being carried out by Messrs. Braid and Co., of Manor-street, Chelsea, the contract for the works being ^£30,400. The working drawings as originally prepared by the architect, and the tender as given by Messrs. Braid.” Published in The Building News.

The design involved a frontage of seven bays facing onto Kensington High Street; the central section of three bays featured a doorway with stone surround and canopy on the ground floor; there were tall windows with integrated oculi interspersed with Corinthian order columns on the first floor and a large carved pediment and flagpole above. A large extension at the rear of the building, intended to create a new courtroom and committee room to a design by William Weaver, the surveyor to the vestry, and William Hunt, was completed in 1899. It went on to become the headquarters of the Royal Borough of Kensington when the area secured Royal borough status in 1901. It was demolished in 1982.