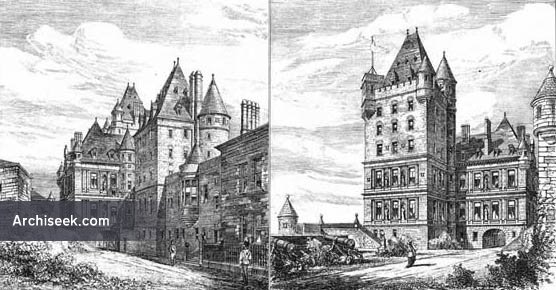 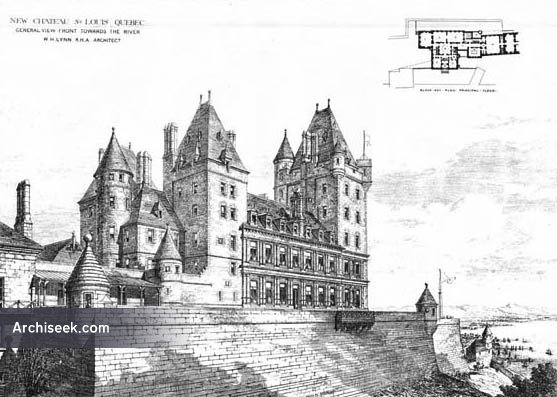 Irish architect W.H. Lynn was brought over to Quebec in 1875 by the Governor General, Lord Dufferin, and he produced several designs for gates and towers on the Quebec city walls. He also produced this design for a new chateau which was not constructed.

“He would have erected on the crest of the cliff, and within the citadel, 360 ft. above the water, a magnificent ‘Chateau St. Louis,’ to be a residence for the Queen’s representative in Canada, the estimated cost of which is 100,000 dols. Here the Governor-General would reside in the summer months, and his presence during part of every year would, it is considered, go far to revive old historical associations, and to make Quebec a place of fashionable resort. The design, also by Mr. Lynn, for this ‘Castle of St. Louis,’ shows a frontage of 200 ft., with a depth partly of 60 and partly of 100 ft., a basement, two main storeys, and attics, and two towers of different heights. As a whole, it is described as an agreeable melange of the picturesque Norman and the Elizabethan styles. Such a building, perched on the cliff at 360 ft. in height above the water, would be a most imposing object to the view, and, with the viceregal flag floating from its lofty towers, would do more than merely please the eye. If there be ‘sermons in stones’ at all, this proposed structure would preach British connection and the reach of Imperial power more effectually than the most eloquent language could do. It would be, as a contemporary says, a Dominion work, built upon Dominion property, and for Dominion purposes.” The Irish Builder, January 1 1875.