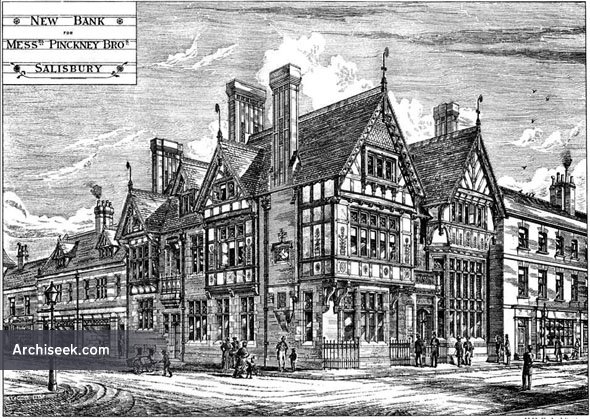 Everett & Co. first opened a bank in Salisbury in 1811, situated in the Old Weavers’ Hall, Endless Street. After changes in ownership it became known as Pinckney Brothers in 1856, later moving to new premises designed by Henry Hall and located in the Market Place in 1878. By 1897 it had been absorbed by the Wiltshire and Dorset Banking Company.

Published in The Building News, September 6th 1878. “The illustration shows the banking premises now erecting at Salisbury for Messrs. Pinckney Brothers. The building is constructed with Fareham red bricks and Bath stone dressings. The timber-work is of oak, with incised plaster in the panels. The banking.room is 20ft. high, and is lighted by the large bay window, which will be partly filled with stained glass illustrating some of the guilds for which Salisbury was formerly celebrated. The remainder of the ground floor is appropriated to the clerks and private rooms ; a large strong-room and book- rooms are also on this floor. The upper part contains the residence of the manager. The works are now being carried out by Messrs. Hale and Sons, of Salisbury, under the direction of Mr. Henry Hall, architect, of 19, Doughty-street, Mecklenburg-square, London. “