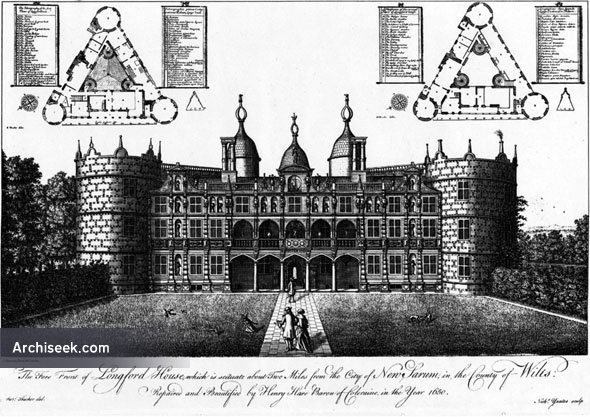 The inscription reads “the fore front of Longford House which is situate about two miles from the city of New Sarum in the County of Wilts. Repaired and beautified by Henry Hare, Baron of Coleraine in the year 1650”.

Around 1576 Thomas Gorges married Helena Snakenborg, the Swedish born dowager Marchioness of Northampton and Lady-in-waiting to Queen Elizabeth. They rebuilt the Longford property as a triangular Swedish pattern castle on the banks of the River Avon. The main building had several floors and was triangular with a round tower in each corner; the three towers representing the Father, the Son and the Holy Ghost. There was a chapel, kitchen department, several boudoirs and sitting rooms, as well as bedrooms. Fresh cold water was pumped to various floors and there were water closets operating with rainwater.

In 1717 Longford Castle became the Bouverie home, purchased by Sir Edward Des Bouverie from the Coleraines. Subsequent generations of the family beautified the interior of the castle and surrounding park. Jacob, 2nd Earl of Radnor (1749-1828), employed James Wyatt to change Longford from a reasonably modest chateau into a hexagonal palace. He destroyed one of the Elizabethan towers and replaced it with a larger one of his own design, added two more towers and linked each to each other. Jacob, 4th Earl of Radnor (1815-1889) oversaw the last significant changes to the castle architecture, undertaken by Anthony Salvin. These included the formation of a second courtyard, the doming over of the central courtyard and the addition of a square tower.