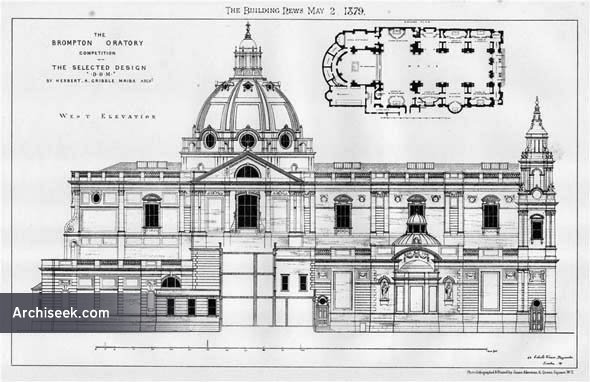 An architectural competition was announced in January 1878 to design a new church. It was not limited to Catholics, and offered prizes of £200 and £75. The chief requirements were: the style was to be “˜that of the Italian Renaissance’, and the sanctuary, at least sixty feet deep, was to be “˜the most important part of the Church. Especially the altar and tabernacle should stand out as visibly the great object of the whole Church’; the nave was to be of a minimum width (50 feet) and maximum length (175 feet); the subsidiary chapels were to be “˜distinct chambers’, not mere side altars. Choice of material was unrestricted and although estimates of cost were required no limit in that respect was stated. There were thirty pseudonymous competitors with twelve shortlisted designs: A.J. Adams; Adams & Kelly; Edward Clarke; Henry Clutton; George Goldie; Gordon and Flockhart; G.E. Grayson; Herbert Gribble; George Gilbert Scott junior; Bernard Smith; Tasker & Bonella; and Vicars & O’Neil.

Grayson’s design was well received by The Builder, The Building News and the British Architect who were generally critical of Herbert Gribbles chosen design, who was only 29 when he won the competition. The foundation stone was laid in June 1880; and the new church was consecrated on 16 April 1884. The dome was completed in 1895, standing 200 feet (61 m) tall and is the second largest Roman Catholic church in London, after Westminster Cathedral (1903).