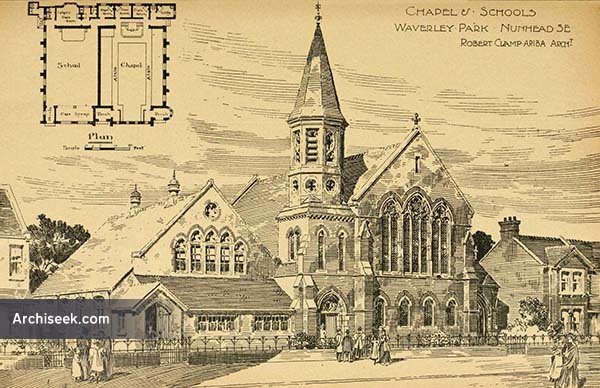 “This block of buildings has recently been erected in the Ivydale-road, Nunhead (a district known as Waverley Park), for the Methodist New Connexion. The site was given by the adjoining owner, and measures 100ft. frontage with a depth of 90ft., none too large for the accommodation required — viz. , a chapel to seat not less that 4011, and a hall or schoolroom to accommodate the same number, besides accessories. By uniting the two in one block, as shown, space has been economised, whilst ample light is secured to the chapel by clerestory windows above the roof of the hall, which is kept at a lower level. There are no galleries ; but provision is made for such in future when required. The walls are of brick, with dressings of Monk’s Park stone. The upper part of turret is of oak. The design is the result of a limited competition, Mr. R. Clamp, of Woking, being the architect. Mr. E. Jones, of Nunhead, is the builder, and the cost was under £3,000.” Published in The Building News, February 11 1898.