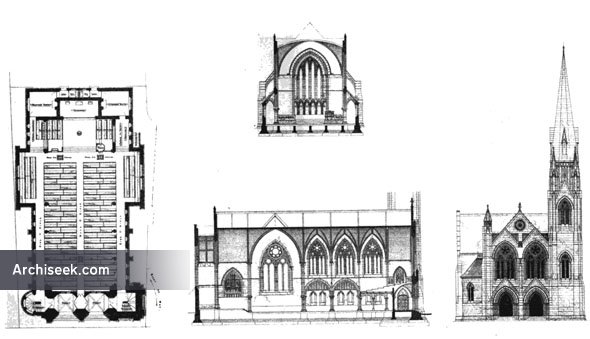 From The Architect, October 16, 1875: The design is an endeavour to produce a building suitable to the JL simple ritual and service of the Wesleyan Methodist Church, and at the same time to harmonise with the ecclesiastical buildings of the University city of Oxford. The plan comprises a simple nave, with lofty clerestory windows over side aisles intended for entrances only, with transepts intervening between the organ bay, the choir seats, and the chancel recess for communion. All the seats are so arranged as to give the entire congregation an uninterrupted view of the officiating minister.

The front is of rather novel treatment, in double bays, with twin porchec, and four-light tracery windows over, harmonising with those of the clerestory. One of the staircases to an end gallery is carried up as a tower and spire, grouping the several parts into unity. The principal features sought in the design are simplicity and dignity ; proportion of parts more than elaboration of detail. The design is by Mr. Alexander Lauder, of Barnstaple