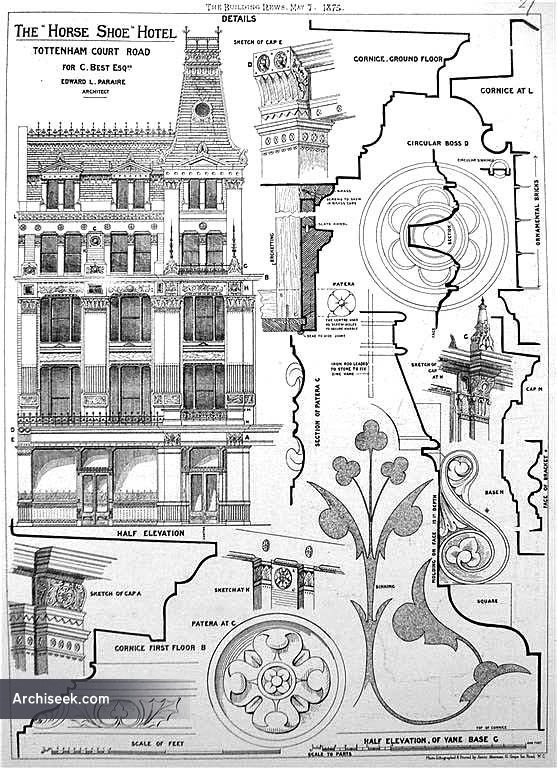 The former Horseshoe Hotel at 264-7 Tottenham Court Road is a substantial building, constructed in three phases, of yellow London stock bricks with terra cotta and Portland stone dressings and a slate-covered mansard roof, comprising a basement, ground floor and four upper floors on the front range. Documentary evidence suggests a date of 1875 for the earliest phase of the building, a range fronting Tottenham Court Road at the northern end of the present site. It has a central tower and friezes depicting Tudor roses, horse shoes and cherubs. Internally, the floors are supported by cast-iron beams, carried on load bearing walls. A two-storey brick extension was constructed at the rear of the building between 1875 and 1893, when the Horse Shoe Brewery Tap, south of the hotel, was demolished and a range of iron frame construction, outwardly matching that of 1875, was constructed. This incorporated a bar, staff accommodation and a kitchen on the 4th floor. The hotel was extended to the east in 1929, on the yard of the former Meux’s Horse Shoe Brewery. An iron framed red brick building comprising a basement, ground floor and two upper floors, was constructed. The ground and 1st floors contained a grill room and restaurant, and the 2nd floor housed the Masonic Temple, and its domed roof, the interior of which was decorated with stars. The number of hotel rooms in the front range was reduced in order to accommodate more dining and drinking facilities and the service rooms required to operate them. By the early 1980s the hotel had ceased to operate; the basement, ground and 1st floors were split into separate units and converted to restaurants and retail premises. The Masonic Temple was used as a music venue, and the rest of the building was abandoned. Illustration published in The Building News, May 7th 1875.