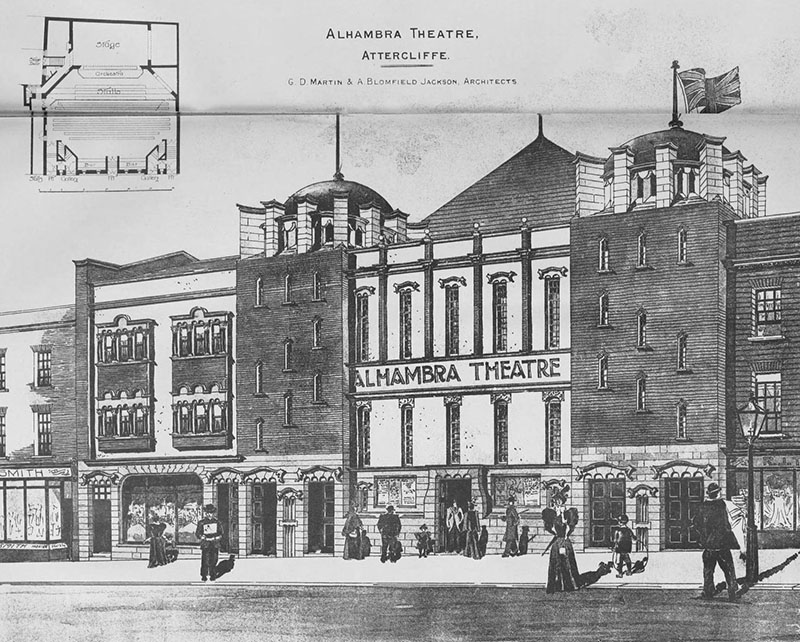 Originally opened on 3rd January 1898 as the Alhambra Theatre of Varieties and was designed in a Moorish style with a seating capacity was 1,200, by the architectural firm Martin & Blomfield Jackson, headed by A. Blomfield Jackson, one-time partner of noted theatre architect C.J. Phipps. It closed in June 1930 and was re-designed by Fred A. Foster in an Atmospheric style, re-opening as a full-time cinema, but with occasional variety acts booked. Demolished in 1962.

“This theatre was opened last January. The front elevation faces the Attercliffe-road. The lower portion of the front is of stone, resting on a base of coloured glazed bricks. The upper part of the two sides of the building is of red brick, the centre being of stucco with carved heads to the windows. The flanking portions on either side, which are devoted to staircases, are carried up to form towers, and these are terminated by lead cupolas and flagstaffs. Arc lamps are suspended over the main portion of the building, and the windows being of stained glass with electric lights behind them, light up the building. The interior of the house is decorated with Moorish designs, and all the fittings are in keeping. The seating accommodation consists of ground-floor area, with a gallery over. There are four direct means of entrance or exit to the ground-floor seats, and two to the gallery. There is also a pass stair between the two parts. The stage has a separate entrance at the back of the building, and in close proximity are dressing-rooms and the manager’s office. ‘The building is of fireproof construction, and hydrants are provided in case of emergency. The lighting throughout consists of a duplicate system of electric light and gas, the former being supplied by an engine and plant laid down for the purpose; the gas is only provided in case the electric light should at any time unexpectedly not be available. The theatre has been erected for the Attercliffe Alhambra Company from the designs and under the superintendence of Messrs. A.D. Martin and A. Blomfield Jackson, architects, both of London. The contractors are Messrs. G. Longden and Sons, of Sheffield.” Published ion The Building News, April 1 1898.