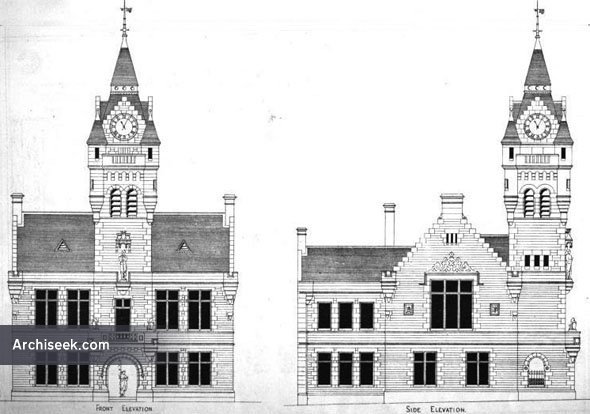 From The Architect, December 11, 1875: This building, now in course of erection, contains on the basement floor a large cellar. The ground plan comprises vestibule, town clerk’s chambers, record room, police office, two cells, superintendent’s house, &c. The first floor contains hall, magistrates’ and witnesses’ rooms, lavatory, etc. The staircase is lighted from the roof. A room is provided in tower from which access is had to balcony over entrance door.

The building is being erected on the site of the old Town Hall, the back wall of which was seven feet thick, and formed part of Bkuce’s Castle. The walls are of red sandstone, obtained from the local quarries. The roofs will be covered with sea-green slates.

The works are being carried out by, and under the superintendence of, Mr. William Johnson, clerk of works, from the design of Mr. Peter Smith, Glasgow.