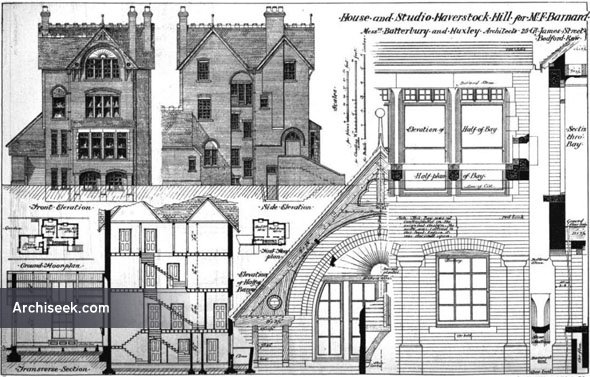 From The Architect, December 18, 1875: The illustration gives two elevations, a section, plans of ground .1. and first floors, and details of the front of the house and studio lately built for Mr. Frederick Barnard.

The drawings themselves will be found sufficiently explanatory. The elevations are of Suffolk red bricks, the tiles are old, the ridges were supplied by Mr. J. K. Cooper, of Maidenhead. The incised plaster work, which is freer in character than shown on the drawings, was executed by Mr. Barnard himself. The bay window to front was not decided upon till some time after the works had been commenced, when it was not thought advisable to remove any of the work then executed.

The works have been carried out by Messrs. J. Linzell & Son, builders, of Tottenham, at a cost of about 1,850/., from the plans and under the superintendence of Messrs. Batterbury & Huxley , Architects, of 25 Great James Street, Bedford Row, W. C.