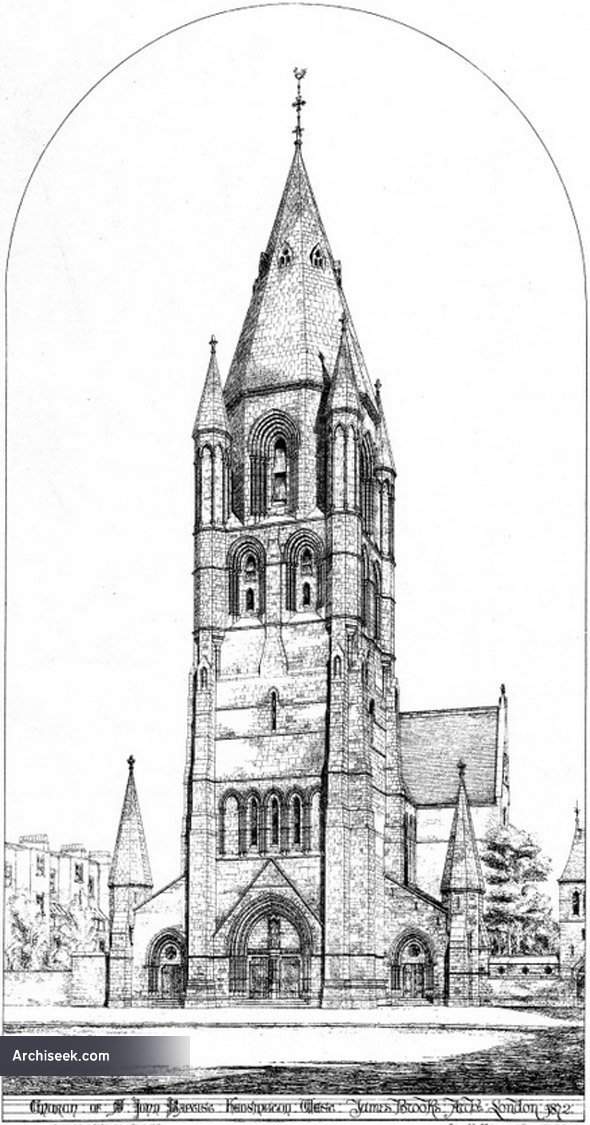 The site of the church was purchased from the Holland Estate in 1868 with the intention of building a daughter church in the parish of St Barnabas, Addison Road. A stipulation of the purchase was that the church was to be of stone. The stone church was begun in the mid-1880s the chancel being completed by 1885. Construction continued westward for a further twenty-five years and ended with the completion of the west front in 1910. There were several schemes for the west front. The original intention was for a tower and spire but the ground proved too soft for this. Brooks died in 1901 and his associate J.S. Adkins completed the west front in 1910. The church was built of Acaster rag rubble with Bath stone copings. The interior is in dressed Bath stone.

WE have chosen this week for a double page illustration this noble church, now in course- of erection from designs furnished by Mr. James Brooks, architect. Our readers are now so familiar with Mr Brooks’s bold and characteristic work that it is unnecessary for us to offer any criticism on this design. The church consists of a nave, 73ft. long, 28ft. wide, 76ft. high to the ridge, and 6Oft. to the top of its coved ceiling, with lean-to-aisles 13ft. wide. Beyond these is a compartment treated as projecting transepts, with oblong crax between, surmounted by a stately fleche. This portion is,however, as regards the arrangement of the seats, treated internally on plan as a simple continuation of the nave and aisles, but by its expanded width, its lofty arches, &c., forms a grand introduction, as it; were, to the chancel, with which, rather than with the nave, it is architecturally incorporated, and to which it adds great dignity, being vaulted in the same manner and at the same level. The chancel consists of two bays, and is terminated by a semi- circular apse. On the north side it has an aisle, called a morning chapel, also with a similar though smaller apse ; and there is an aisle on the south side extending the two bays square-ended, with a two- storied sacristy beyond.