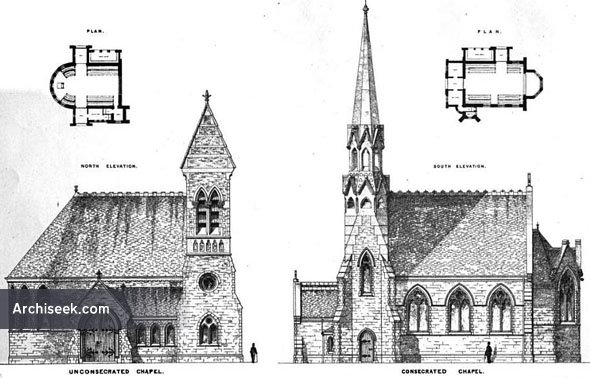 From The Architect, January 30, 1875: We give illustrations this week of the buildings now being erected for the new cemetery between Anerley and Elmer’s End. The chapels are in Kentish rag, with Bath stone dressings and tiled roofs; the insides lined with plain and diaper-pattern Suffolk bricks, and the woodwork in pitch pine. The lodges are in red bricks, with brown tiled roofs.

The works are being carried out from the designs and under the superintendence of Mr. A.G.. Hennell, of Bedford Row ; and Messrs. Willson Bros, are the contractors for the buildings. The wroughtiron entrance-gates and other ornamental ironwork will be supplied by Messrs. Richardson, Slade & Co., of Brownlow Street.

The laying-out of the grounds is now in a forward state, and it is expected that the whole will be completed and the cemetery opened early in the autumn. Messrs. Woodham Bros., Elmer’s End, are the contractors for the ground work.