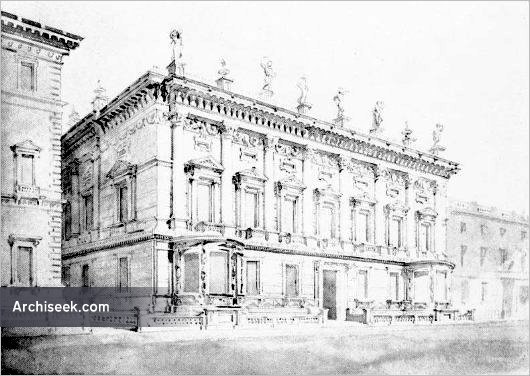 The Carlton Club on Pall Mall in London had invited various architects, including Pugin, Wyatt, Barry, and Decimus Burton to design a new clubhouse. Cockerell declined the opportunity to submit a design, but a few years later, worked on this design for the club. Cockerell devised a “lofty Corinthian colonnade of seven bays” according to the Survey of London. “The columns have plain shafts, their capitals are linked by a background frieze of rich festoons, and the Baroque bracketed entablature is surmounted by an open balustrade with solid dies supporting urns and gesticulating statues.” Cockerell’s design wasn’t constructed, the club commissioning Sir Robert Smirke to design their home instead. After suffering a direct hit during the Blitz, the Club abandoned the site and moved to a smaller building.