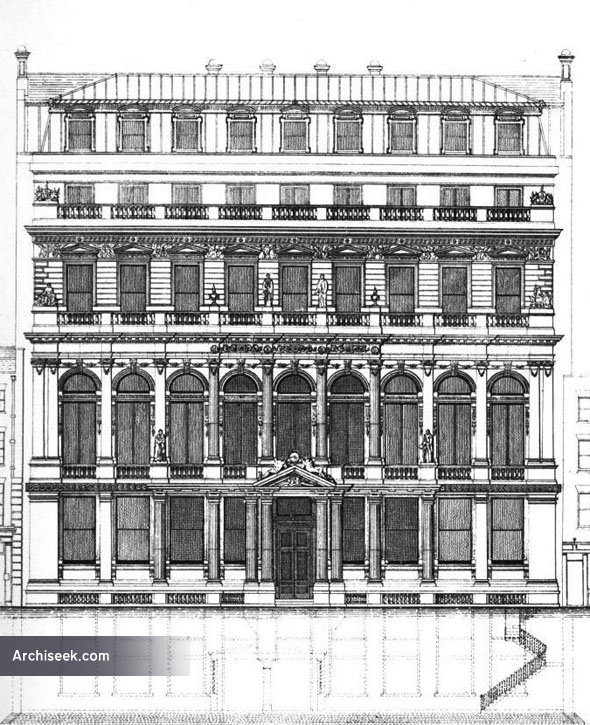 From The Architect, July 10, 1875: The accompanying illustrations have been reduced from some of those which -were submitted by Mr. H. H. Collins, of Queen Street, E.C., in the late competition for the City Liberal Club.

In preparing the design the author was governed by the circumstance that there must be a wide and material difference between the requirements of a Oity and a West End Club, for one is but the temporary resort of the man of business, and in use during the hours of work, while the other is mainly a lounge for those with leisure, and, therefore, in a City Club all arrangements must conduce to expedition and recognition the value of time. The departments were accordingly placed so as to be distinct and separate in themselves, and duly supervised and under immediate control, while combined in the general whole.

The sub-basement contained hall, porter’s office, and receiving room, so arranged as to command supervision over all tradesmen who entered or left the building, as well as over all goods delivered. Contiguous were the offices of the house steward and the wine steward, and the cellars were arranged so that wines might be delivered by lifts into the dining-room with the utmost despatch. Lifts were to be also in connection with the coal and other cellars here in order to economise time as well as service. The entresol basement was appropriated to dressing-rooms, bath-rooms, linen stores, forming a complete and separate department approached with ease by members, newspaper file-room, committee-room, &c. In the rear was the strangers’ billiard-room, approached from members’ staircase, and from entrance hall, and so placed as to obviate the necessity of introducing strangers into the interior of the club. It was lighted and ventilated by methods which the author found to be effective in several billiard-rooms which he has recently erected.

The ground floor contained spacious well-lighted and ventilated writing and newspaper reading-rooms, so situated as to allow of members entering them without delay. In the event of the rooms being used for meetings, by throwing open the sliding doors each would form an apartment nearly 60 feet long by 33 feet wide. The secretary’s office on the floor would be readily accessible to the members and in direct communication with the house steward’s and other offices.

The first floor would be devoted to the large dining hall. The author did not provide accommodation in ” rooms,” as it is found by experience that members of clubs desire to partake of their repasts in the principal refectory, whilst by ” rooms the sociability of the club is not only in some measure impaired, but the service is inconvenient, tardy, and costly. This dining-room would measure in the first instance 60 feet by 60 feet, and if completed it would be 08 feet long, 60 feet wide, and 25 feet high. It would thus be of larger area than any club dining-room in the metropolis, for in the City of London Club the dining room measures 60 feet by 30 feet, in the Reform it is 116 feet by 27 feet, in the United Service 101 feet by 30 feet, in the Junior Carlton 90 feet by 27 feet, and the diningroom of the St. Stephen’s Club contains about 3,000 feet superficial. It was intended to have the pilasters cased with scagliola, the niches to be filled from time to time with statues or busts of the great liberal leaders, and the panels in the cove of the ceiling by basso-relievos representing political epochs in the history of the party. Contrary to the ordinary arrangement, the serving-room was placed in the centre, close to the lifts and servants’ staircase. In a mezzanine over the serving-room was a still-room, midway between the dining hall and the billiard or smoking-room, so that tea or coffee might be supplied to either with expedition. Whilst the ground and first floors were appropriated to what may be termed the necessities of a City club, the second floor was devoted to its luxuries, and contained smoking, billiard, and card rooms, with space for increased billiard room. The third floor contained the kitchen and its offices; the kitchen would be 40 feet by 27 feet, or 1,080 superficial feet; that in the City of London Club containing 600 feet, and in the Reform Club 784 feet. The fourth floor contained the female servants’ bedrooms, lavatories, &c.

In style the Palladian was selected, and as the street in which the building would be erected is very narrow, and as the_ spectator would in looking up at it more often see eoffites than projections or plain surfaces, the details were proportioned to meet those difficulties. The instructions prescribed ample window openings and the avoidance of excessive projections. In order to comply with these conditions, the principle of the stanchion was adopted for the main supports ; that is, the same quantity of material was disposed laterally

rather than longitudinally. The outline of the piers preserved intact the angle of light. It was the author’s aim to have the principal part of the club at once denoted by the long range of semicircular windows of the large dining hall, whilst the entrance and future centre of the building is further characterised by the porch and approaches thereto.

It was proposed to heat the rooms by open” fire places, and the corridor, strangers’ billiard-room, and some of the dressing-rooms, &c., with hot water coils placed in ornamental cases. For ventilation the depths of the floors would afford space for the insertion of air ducts between them; a portion of these would communicate with an extracting flue built at the side of the kitchen fireplace, thus producing an incessant upward or rarified current of great velocity, carrying with it in ita passage the products of combustion and the vitiated or impure atmosphere. The pure air would be carried upwards (after being filtered and screened) from the basement, by means of fresh air flues built in the walls, communicating with the air ducts formed between the girders of the floor and from thence with the various rooms. This arrangement the author has found by experience to be inexpensive in construction, economical in its operations, and to possess automatic action.

As regards construction it was proposed that the facade in Walbrook would be faced with Portland stone ashlar, the pilasters being of polished granite. The back elevations would be executed in best stock brickwork. Portland stone, with granite or marble columns and pilasters, would be used in the grand hall. The principal staircase would be of polished oak (being more fireproof than stone), and the back staircase of teak. The floors of the large dining hall would be supported on wrought and rivetted iron girders spaced 10 feet apart, bedded on ‘cast iron cantilevers built into the walls. The principal floors would be covered with parquet, and the entrance hall with marble mosaic inlays. The third or kitchen floor would be constructed with iron girders, concreted throughout and covered with stone paving or oak boarding; the sculleries and offices being paved with, tiles. The general finishing of the principal rooms including doors, window frames and sashes, carvings, &c., would be of polished oak.

The quantities were taken out approximately by a surveyor, and it was estimated that (subject to the usual latitude of percentage, and taking the then price of labour and materials as a standard) the design could be executed with the best materials and workmanship for 26,500;., including the rebuilding of party walls but exclusive of kitchen fittings, steam closets, hoists and lifts.