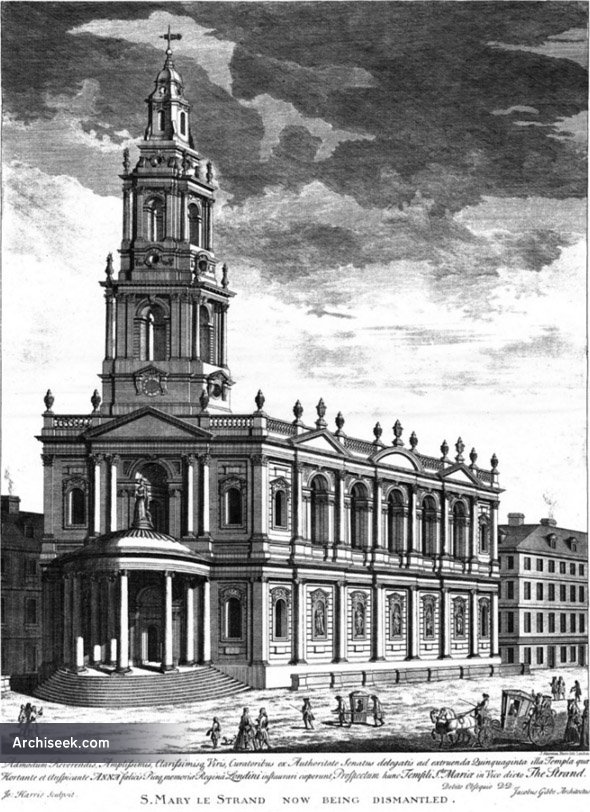 St. Mary le Strand was the first of the fifty new churches built in London under the Commission for Building Fifty New Churches, at a cost of some £16,000. Construction began in February 1714 under the architect James Gibbs, being his first major project following his return from Italy. The steeple was completed in September 1717, but the church was not consecrated for use until 1 January 1723. In the late 19th century, the London County Council proposed to demolish the church to widen the Strand; a campaign involving the artist Walter Crane succeeded in averting this, although the graveyard was removed. This perspective view published in The Building News, September 30th 1887, with description of “Now being Dismantled”.

According to Gibbs, the church was originally intended to be an Italianate structure with a small campanile over the west end and no steeple. Instead of the latter, a column 250 feet high surmounted with a statue of Queen Anne was to have been erected a short distance to the west of the church. A great quantity of stone was purchased and brought to the spot, but the plan was abandoned on the death of the queen in 1714. Instead, the architect was ordered to reuse the stone to build a steeple, which fundamentally altered the plan of the church. Gibbs explained: “The building being then advanced twenty feet above ground, and therefore admitting of no alteration from east to west, which was only fourteen feet, I was obliged to spread it from south to north, which makes the plan oblong, which should otherwise have been square.”

The interior of the structure is richly decorated with a plastered ceiling in white and gold, with a ceiling inspired by Luigi Fontana’s work in the church of Santi Apostoli and Pietro da Cortona’s Santi Luca e Martina, both in Rome. The porch was inspired by Cortona’s Santa Maria della Pace. The walls were influenced by Michelangelo and the steeple shows the influence of Sir Christopher Wren.