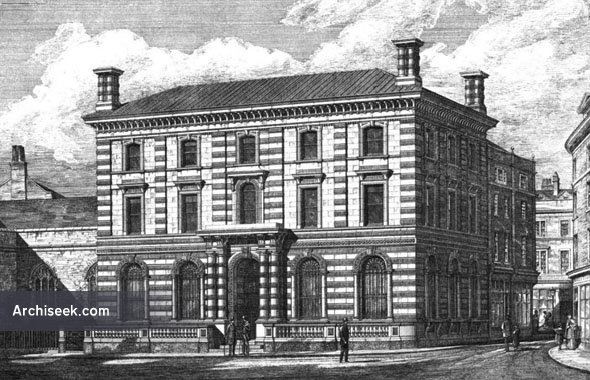 From The Architect, September 11, 1875: We illustrate this week a view of the above new building now in course of erection for Messrs. Milford, Snow & Co. It is situated at the junction of the cathedral yard and Broadgate””on tho former, but an enlarged, site””having frontages respectively of about 70 feet nnd 40 feet. It will be seen the principal entrance is in the centre of the main front, through a deeply recessed stone lobby; the banking room being 3G feet by 34 feet and 17 feet high, the remainder of the ground floor provides private rooms for the partners, and a resident’s entrance and staircase adjoining St. Patrick’s Church.

In the basement are spacious strong rooms for books, plate, cash, and securities: a lift and separate staircase for the officials, ventilating and warming apparatus, lavatory, and other conveniences. , The upper floors will be occupied by the resident in charge.

The fronts are being executed in Corsham Down, and the more exposed portions in box ground stone.

Ornamental wrought iron grilles are intended to be put to the ground storey windows.

Tho building is being erected in two portions””on part of the site the banking business is to be carried on until the new banking room is finished, – when the remainder of the old buildings will be cleared away, and the premises completed.

The works are being carried out by Messrs. Stephens & Son, of Exeter, from the designs and under the direction of Mr. John Gibson, of Westminster, Mr. Davey acting as clerk of the works. The drawing from which our view is taken was exhibited in the Royal Academy this year.