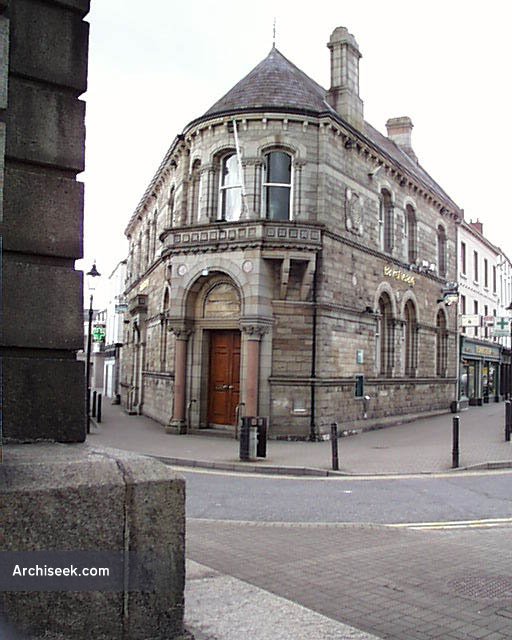 Formerly the Hibernian Bank – the Bank of Ireland is a good example of the bank’s campaign to attract catholic wealth in the late 19th century. This was done by ‘churchifying’ their external appearance. A good example of the Hiberno-Romanesque style by O’Neill & Byrne Architects, the bank is carefully sited with the entrance on the curve of the site underneath a corbelled balcony. A good banking hall survives although with modern fittings. The building benefits from being attractively sited beside the Dawson Monument and across Church Square from the Courthouse and St Patrick’s Church of Ireland.

“Our illustration shews the design for the new bank premises in course of erection in Monaghan, for the Hibernian Banking Company. An excellent site has been obtained on the corner facing Church-square on the one side, and the leading street to the railway station on the other.

The ground floor is occupied by the public office, manager’s office, safe, and the diningroom and culinary apartments of the manager’s residence; the first floor is entirely occupied by the manager’s apartments, and rooms for the porter, to which there is a separate entrance. The internal fittings will be principally pitch pine stained and varnished. Mr. P. Brodigan has the contract for the building, which is from the designs of Messrs. O’Neill and Byrne, from whose drawings our illustration is taken.” The Irish Builder, September 1 1875