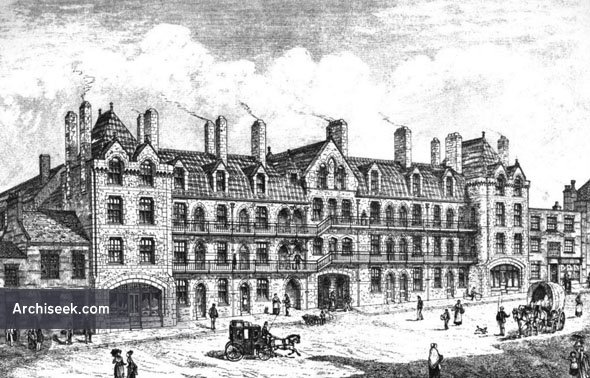 From The Architect, August 21, 1875: The Bristol Industrial Dwellings Company (Limited), which was incorporated last year, has commenced its work with this block of buildings, now in course of erection opposite Brandon Hill. The building, a view of which appears in the present number, forms three sides of a quadrangle, the fourth side being open to a piece of land which will be laid out as recreation ground. To ensure ventilation and light for the angle tenements, the sides of the quadrangle have been detached from the front, and form separate blocks, between which and the front block the air has free course. Each block has a broad stone staircase, without balustrades, but with a central wall supporting what would otherwise be the outer ends of the stone steps. One end of each staircase is completely unenclosed, thus preventing both the formation and ascent of foul air; and as the room doors do not open on the staircases, but on the balconies, the former cannot communicate infection should any be present in any tenement. The tenements consist of one, two, three, or four rooms each, and with the exception of the single-room tenements, each has its own front door opening on the street or balcony.

Each tenement is thus as distinct from its neighbours as are separate houses in the same street. Some tenements are provided with sculleries, and all with cupboards and coal-bins. Each living-room has a small range with oven, and each bedroom (with one or two exceptions) a fireplace. A dust-shoot adjoins each staircase, to which a door on each floor is provided, and as old crinolines and umbrellas are occasionally forced into these shoots in similar buildings elsewhere, they are in this case made of ample size, and will allow of such demands being made upon their capacity without detriment or stoppage.

The elaborate appliances of some of our industrial buildings have been dispensed with, partly because the class for whom these dwellings are intended neither wish to have or know how to use them, and partly because the rental of tenements in Bristol is so low that no adequate return could have been realised had anything beyond the simplest accommodation been attempted. Water, supplied by the Bristol Water Works Company, will be laid on to each staircase landing, and special fittings to render waste impossible will be adopted. The whole of the water stored in the various cisterns for supplying the building will be available at any moment in case of fire, and appliances for its immediate distribution will be provided on the staircases.

The ventilation of the various rooms has been provided for in the arrangement of the sashes, in which small openings, which cannot be closed, will give a constant and imperceptible supply of fresh air to each room. Sash windows have been adopted throughout. Gas will be laid on to the staircases and balconies, but not to the rooms. The stone for the walls is being quarried from the site, and the dressings are of Box and Farleigh Down stone. The roofs will be covered with tiles, and the courtyard and paths with tarpaving.

Messrs. Stephens & Bastow, of Bristol, are the builders, and Messrs. Sheppard, of Ebro Works, Dudley, are supplying the ironwork. The buildings are designed and superintended by Mr. E. Hoole, F.R.I.B.A., London.