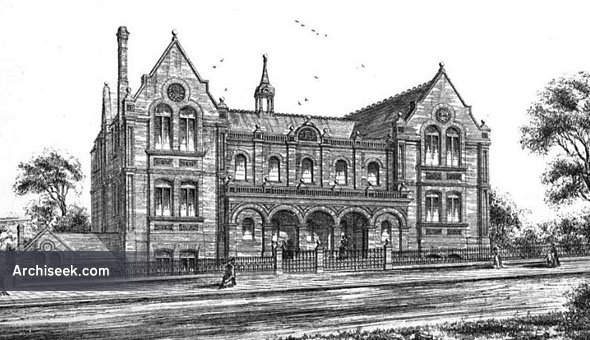 From The Architect, November 13, 1875: We give this week an unsuccessful design for the ” Roan’s Charity ” Schools, Greenwich, submitted by Messrs. Newman & Billing, architects, of Tooley Street. It will be seen by the plan that the scholars are intended to enter by tho northern doorway, pass down the cloak-room, along the corridor, and up the southern staircase into the hall, thus avoiding the confusion caused by repassing. Both entrances can be used at the same time for dismissing the school. When the public are admitted to the school the southern entrance is intended to be used. The governors enter by the northern doorway, and have Access to their room and the whole building without being compelled to enter the hall. The caretaker has independent rooms, which can be rated separately, and has access to the building by a door into cloak-room under a covered way.

Tho basement floor contains kitchen, scullery, and larder for the school of cookery, largo dining-room, lavatory, and cloak-room, warmed and ventilated stores and covered playground. The ground floor was to have hall with two entrances and raised platform, five class-rooms, opening with glass doors directly into the hall (two of them being capable of being thrown into one), a library or governors’ room with retiring-room, and cupboard for archives, and under the platform a private room for the mistress and a room for parents and children waiting to see the governors. The upper floor provides three class-rooms and a drawing class-room, lighted from the north, and also a consultation room for the teachers. The class-rooms enter from galleries open to the hall, and the galleries could have been utilised for spectators as occasion may require.

The lighting was intended to be by ordinary six-star pendants in the class-rooms, and a sun-burner in the hall. Every room was to have a supply of fresh air warmed by contact with hot-water pipes ; and also a flue for the extraction of foul air, which was carried up in the walls and communicates by means of a pipe in the roof with the central ventilator, where the heat of the sun-burner would have formed the motive power of extraction. The heat was to be provided by a boiler in the basement. The governors’ room, waiting and mistress’s room, and caretaker’s rooms were to have Qalton’s stoves, giving a supply of fresh warm air, with open fireplace.

The building was intended to be carried out iu red bnck.