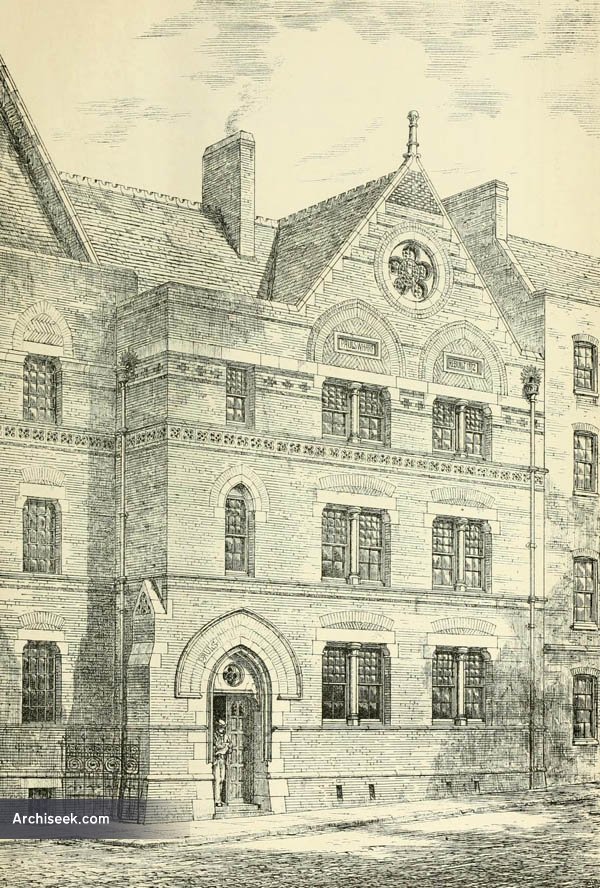 From The Building News, October 17, 1873: “These offices, of which we published an illustration in our last week’s number, have lately been erected in connection with the large new river-side warehouse in Paul’s Wharf. The general design of the whole range of buildings is Gothic, treated in the most simple and unpretentious manner, the aim of the architect having been to avoid doing anything that should be in any way out of keeping with tho purely business character of the building. Throughout the building every care has been taken to secure substantiality, strength, and light. The warehouse itself is divided into three largo sections of about 50ft, by 50ft., by thick partywalls, in which double iron doors are recessed and built ; tho offices being also shut oil from tho main building by similar doors.

The whole of the works have been carried out by tho building owner himself, who purchased his own materials, and employed his own men, thus avoiding any difficulty or delay on account of strikes, etc. The general materials used wore picked washed stocks for the fating, with malm and red brick for string-courses and arches, Bath stone for columns and heads of windows, &c , Portland stone for the more exposed string-courses and labels, »S:c., and terra-cotta in some of the enriched bands which run all round the building. The whole of the works have been designed and carried out under the immediate supervision of the architect, Mr. Robert W. Edis, P.S.A., Fitzroy- square, London. “