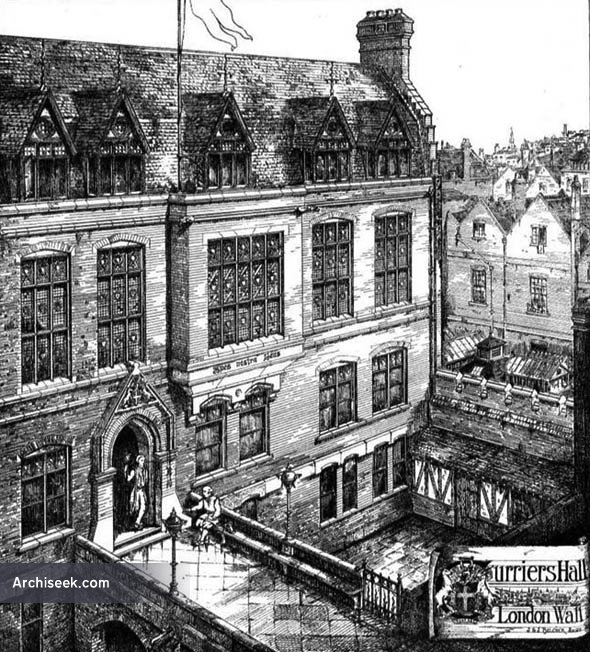 The Curriers’ Company has a long and complex history, dating from 1272 when the “Mistery of Curriers” first became a trade association. By around 1580, the guild of Curriers was recognised as a Livery Company of the City of London, but it was not until 1605 that King James I granted the Curriers their first Charter of Incorporation as 29th in the order of precedence.

Over the ensuing four centuries, the Company built no less than 6 Curriers’ Halls in the City, the last one being constructed in 1876. Unfortunately, the difficult economic circumstances of the early 1920s forced the Company to sell its 6th and last Hall on London Wall. It moved in with its long-standing trade and Livery partner, the Worshipful Company of Cordwainers. Along with many other Livery Halls, the Cordwainers’ Hall on Cannon Street was itself destroyed by bombs in 1941 and the Curriers have been without hall since.

From The Building News, September 26 1873: “We give this week a view of tho New Currier’s Hall, taken from the architect’s drawing in this year’s exhibition of tho Royal Academy. Tho building is situated in London Wall, on the site of the old hall ; the materials used are brick with stone dressings. The ground floor consists of the Company’s ffices, the clerk’s room, &c., tho hall and committee-rooms being on tho first floor. Tho windows contain the arms and mottoes of masters and benefactors of the Company in stained glass. The works, which now approach completion, are being carried out by Messrs. Perry. Bros., of Hoxton, from the designs of the Company’s architects, Messrs. John and John Belcher, of Adelaide-place, London-bridge. “