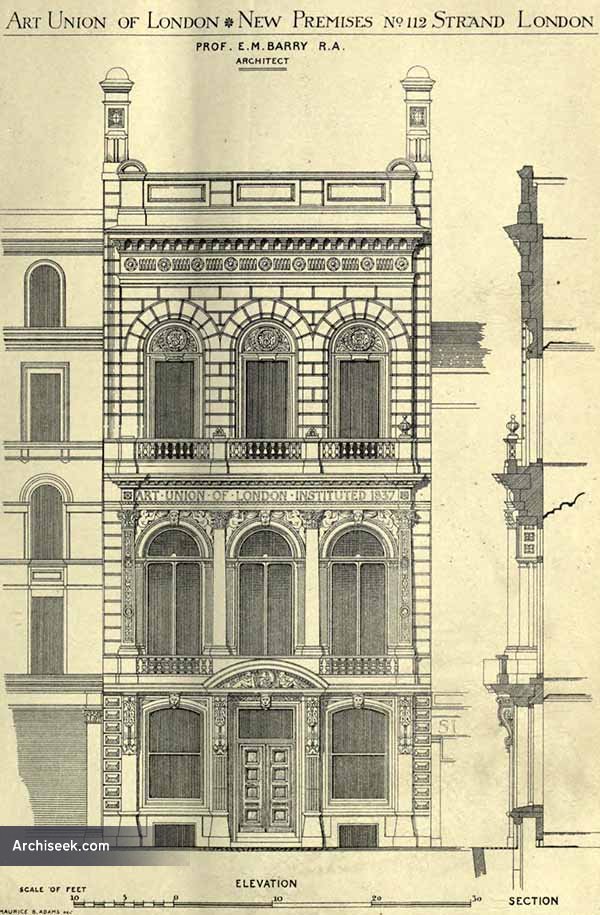 Front elevation & section, and details published in The Building News, March 7th 1880. “The new building contains, on the ground floor, a front office or shop, and at the back, a council-room and a room for the secretary, looking over the ground attached to the Savoy Chapel. The first floor is occupied by two galleries for the exhibition of pictures and sculpture. The front gallery, towards the Strand, is lighted by the three arched windows of the principal story. The other, and larger gallery at the back, has a top light only. The basement is occupied by carpenters’ workshops, packing-rooms, and stove-rooms, and there is also a sub-basement, which was rendered necessary by the great depth of the foundations. The building rests upon a continuous bod of concrete, about 3ft. thick. The front is of Portland stone throughout. The principal story is marked by the employment of a Corinthian order of columns and pilasters, with arched windows
deeply recessed. The spandrels over the windows, and the pilasters, are carved with subjects suggestive of the practice and influence of the tine arts of painting, sculpture, and architecture. The device of the Art Union, used on seals and official documents, is carved in low relief on a circular shield in the tympanum of the pediment over the doorway. The site was presented some irregularities and difficulties with respect to light and air, which lave affected the arrangement of the plan. The contractors are Messrs. Perry, of Tredegar Works, Bow, who expect to finish the building before mid- summer next. The sculpture has been executed by Messrs. Maljey, of Princc’s-mews, West- minster. Mr. House is the clerk of works.”