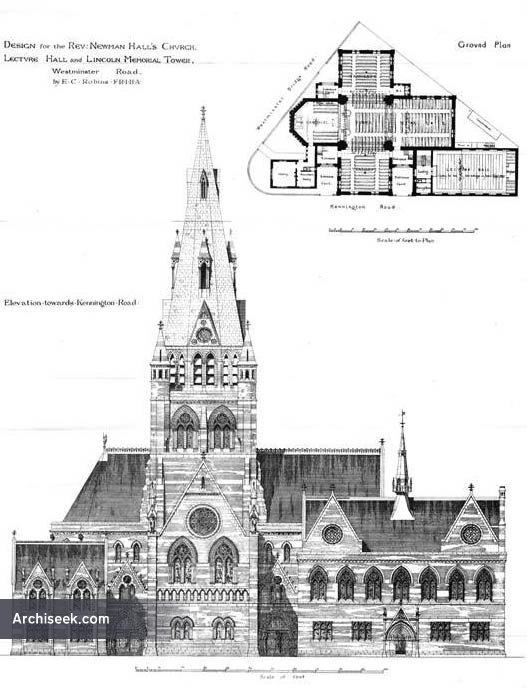 A design concept for Christ Church Congregational Chapel which was completed in 1874. The church as completed had the tower and spire on the main facade as opposed to above the crossing as illustrated. It was bombed during the Second World War, and only the Lincoln Memorial Tower remains to this day.

From The Building News, October 17, 1873: “We give a plan and flank elevation of Mr. Robins’s design for the above church, being one of the four designs originally submitted in competition, to each of whose authors the sum of £70 was paid, but neither of which was accepted, the design now being executed being subsequently prepared. The present drawings illustrate an endeavour to associate ecclesiastical forms with the requirements of Congregational worship. The problem proposed for the solution of the competitors was the accommodation of 2,000 persons in a Gothic structure, so arranged that all might see and hear the preacher, whether either sitting or standing, and to this end it was suggested that no internal columns should be employed. And it is to be regretted that an experiment was not to to be made in this instance, and that tho building now in course of erection retains the internal columns so constantly objected to. The attempt has here been made to achieve tho result desired by a nave and transepts of considerable width and proportionate height, the plan being a short-armed cross, with the tower and spire boldly rising at the intersection. Tho architect would have preferred to have reduced the depth of the transepts, and added to the length of the nave, both for aesthetical and acoustical reasons, but limitations presented by the triangular form of the site precluded this arrangement. There are 1,200 persons accommodated on the ground floor, and 800 in galleries placed across the ends of each arm of the cross, except the choir. The total cost of the completed design, including the various vestries and classrooms and a separate building containing a hall for 800 persons, was estimated to cost £25,000. “