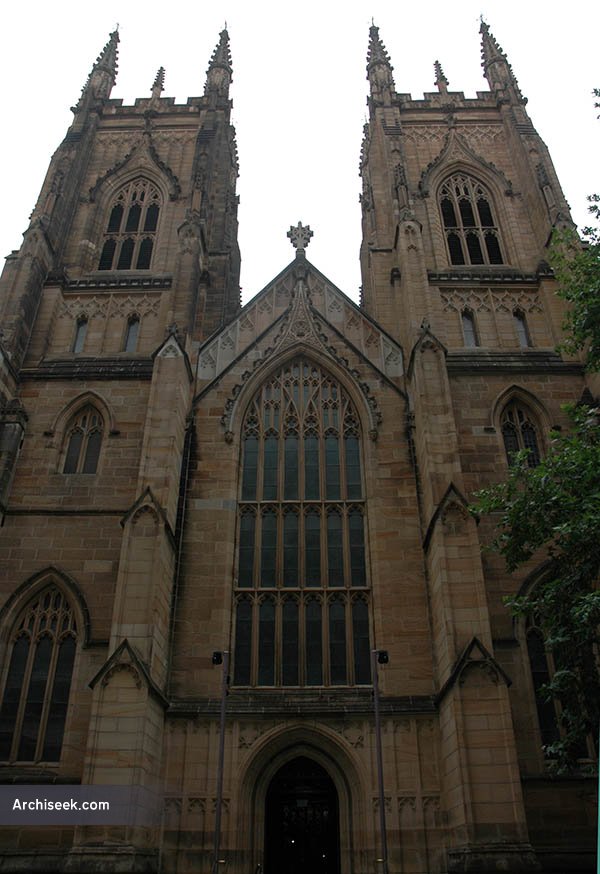 Started in 1837, the plans prepared by the architect James Hume, were of much more modest proportions and were for a traditional cruciform church in the Gothic style. The designs, dating from the early phase of Gothic Revival architecture, did not show a great expertise in the handling of the particular architectural vocabulary. Only one notable section was completed, the façade of the south transept. However, the foundations were laid and some of the walls were constructed up to a height of about 15 feet.

In 1842 Edmund Thomas Blacket was appointed architect to take over the project. He was eventually to become known as the Wren of Sydney, having designed two universities, three cathedrals and fifty or more parish churches as well as banks, offices, bridges, mansions and countless shops, cottages and terraced houses. Blacket became the official Colonial Architect 1849-1854.

The problem now was how to make a truly splendid and imposing cathedral on foundations which were only the size of a large English parish church. Taking into account what Hume had done and the fact that some of Hume’s rather amateurish window tracery was already in place, Blacket designed the cathedral in the style known as Perpendicular Gothic.

The interior is a harmonious composition in Perpendicular Gothic. Although the building is small, it is given a sense of grandeur by the proportions of the arcade and clerestory, the richness of the moldings, the loftiness of the hammerbeam roof with its blue and vermillion decoration, and the decorative details, which include carved stone ribbons around the nave piers, bearing the names of notables in the early Sydney church. The stone used throughout is Sydney sandstone. The chancel has a newly-restored floor in ornate pattern set with marble and intaglio tiles in the Cosmati style by Fields of London, created under the direction of Gilbert Scott. The rest of the building is paved with encaustic tiles of red and black with small intaglio designs by Mintons of Stoke-on-Trent.