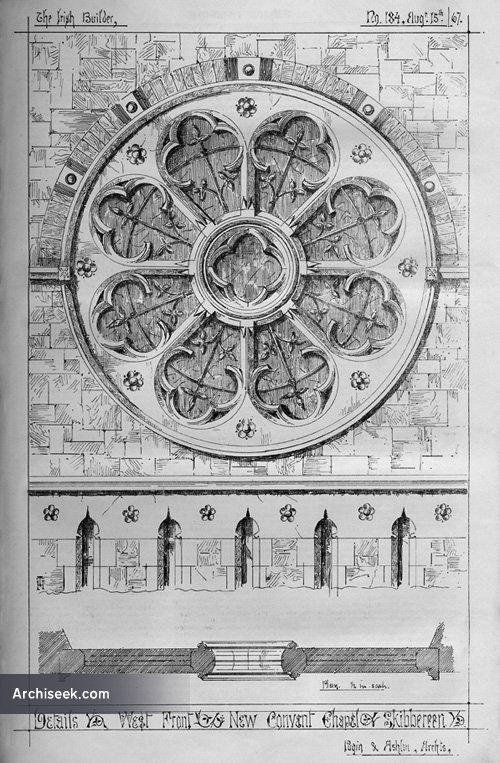 “Our illustration with this number is a portion of the detail elevation of the west front of the new chapel now building at the Convent of Sisters of Mercy, Skibbereen, from designs by Messrs. Pugin and Ashlin. The west window presents some novelty in design of which we may particularize the cusping. Underneath this window is a row of lancets, the heads only being shown in sketch.” The Irish Builder, August 15 1867.

“This chapel, just erected by Mr. W. Murphy, Bantry, has been dedicated. It is in connection with the existing convent, which is situated on an elevation at eastern entrance to the town of Skibbereen, and presents a striking object to the traveller entering by that direction. The style adopted is the Early Decorated. The building contains a lower floor, the nun’s choir, and the sacristy; while on upper floor is the infirmary for the members of the community. On the north side is a small cloister, terminating in a turret, which contains a stairs by which the nuns can reach the organ floor without passing through the chapel. The building is lighted by a circular window in the west gable (illustrated in IRISH BUILDER, No. 184), and eight windows with traceried heads in side walls. The wall over the altar is pierced by a five-light window filled with stained glass, by Messrs. Earley and Powells, representing SS. Patrick, Peter and Paul, and the Divine Redeemer. The roof has arched principals, and is sheeted with timber, stained and varnished. In the side wall next convent are three arches supported on marble columns, the spaces between which are filled with wrought-iron work. Externally the church is faced with Bath stone. The cost of the entire was £1,500. Messrs. Pugin and Ashlin, Dublin, were the architects.” Published in The Irish Builder