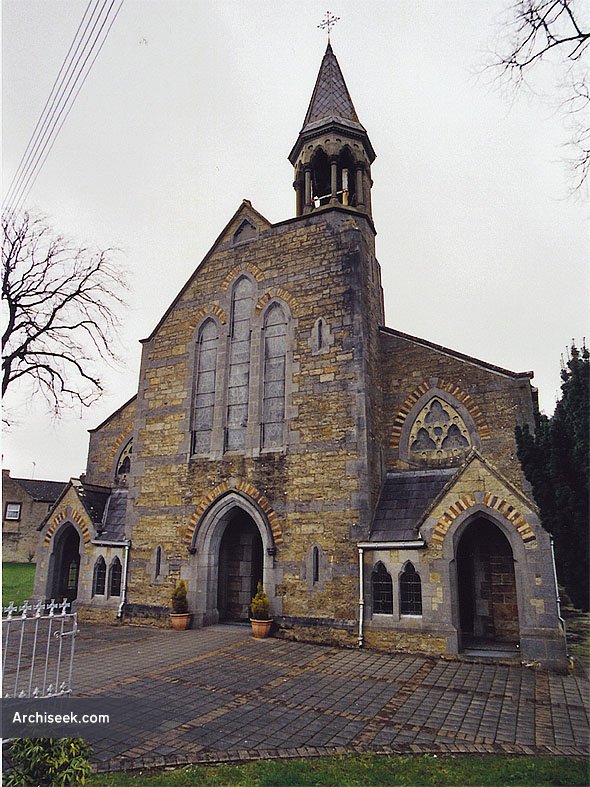 This church designed by local architect William Hague, and is one of his most important early works. It was built on land donated by the local landlord, the Earl of Lanesborough. Hague’s father who has a construction company carried out the construction which took over three years. It was dedicated on 14 June 1863. The total cost was £1,400. In the early 1870s the church received a set of stained glass windows courtesy of a local man who emigrated to New York and made his fortune. The design was praised by contemporaries, including the influential Dublin Builder, for its novel use of contrasted materials, which ‘thus compensate for the lack of ornament which the funds would not afford.’

Described in the Ulster Observer upon completion of the exterior, the interior being temporarily furnished: “The building occupies a good position, at the south end of the town, immediately fronting the main street, from which it is removed about twelve feet ; the intervening space to be enclosed by an ornamental iron railing and gates. The style selected is the early pointed, the plans to be so carried out so that as far as possible the materials at the disposal of the architect may be contrasted, and thus compensate for the absence of ornament, which the funds would not afford. The church is built of freestone, externally, with bands of darkcoloured limestone introduced at intervals in the height of walls, and cut stone dressing of lightcoloured limestone for the doors, windows, groins, &c. Brick arches in two colours are raised over the openings, and the slating on roofs alternates in three courses of red, and one of blue, to the ridge. The windows consist of two and three lights alternately, with spherical triangular windows at the east and west ends, and circular openings, in transept gables, filled with plate tracery of Dungannon freestone. All the sashes are glazed in diamond quarries, with coloured margins sparingly introduced, and stained glass in the tripletof west gable.

The plan consists of nave, aisles, and transepts, indicated by gables rising from the aisle walls; chapels, chancel, with semicircular end and sacristy at the north side of chancel. The total internal length is 86ft. 2in. width ; width across nave and aisles, 40ft.; and width of chancel 19ft. 4in. Access is obtained from the west end, through porches h&ving separate entrances, to the nave and aisles, and over the former is placed the organ gallery with staircase leading thereto.

The west gable of nave projects in front of the aisles, thereby marking the main features of the building, the bell turret being carried up in the south side, assuming an octagonal form above the roof, supported on eight shafts having carved caps, from which spring cushed arches on each face ; moulded and carved cornice, surmounted by a spirelet slated in ornamental quarries of two colours, furnished with a gilt cross of foliated iron rising to a considerable altitude above the street.

The nave is separated from the aisles by east iron columns, with wrought foliated caps, ornamental bands, and moulded bases standing on stone plinths, supporting the girders of main roof, as also the rafters of aisle roofs which abut upon the girders. Moulded arches, springing from the caps of columns, are constructed in each bay under roof plates, and aid materially in maintaining those characteristics, without which buildings of this class fail in the estimation of the critic or the lover of ecclesiological art. All the roof timbers are wrought, stained, and varnished ; those of the nave and aisles being plastered between the rafters ; and the ceilings of transepts, chapels, and nave boarded on the under side, formed into panels with moulded ribs. Sittings are intended to be provided in the nave only, the space under which being boarded. The aisles, passages, and porches are paved diagonally with the blue and red Staffordshire tiles, enclosed by margins of freestone.”