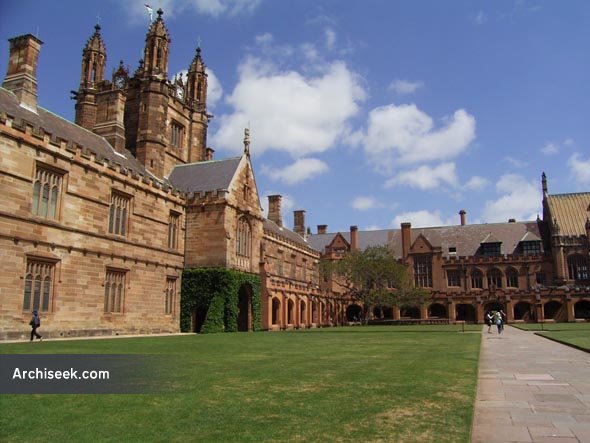 The architect Edmund Blacket designed the original Neogothic sandstone Quadrangle and Great Tower buildings, which were completed in 1862. While famous for his churches, and sometimes referred to as of “The Wren of Sydney”, Blacket also built houses, ranging from small cottages to multi-storey terraces and large mansions; government buildings; bridges; and business premises of all sorts. Blacket’s architectural practice was highly influential in the development of Australian architecture. He worked with a number of other architects of both Australian and international importance: James Barnet, William Wardell and John Horbury Hunt.

Blacket was involved with the foundation of Sydney University from the outset, and played a role in selecting the site on the Parramatta Road at the top of a rise overlooking Grose Farm (now Victoria Park). He was appointed University Architect on 23 May 1854, several days before he resigned as Colonial Architect, and he continued to supervise building for the Government for some months.

One of his first tasks as University Architect was to persuade the august committee to accept the notion that Perpendicular Gothic really was the only right and appropriate style for the building, because of its association with most colleges of both Oxford and Cambridge. The notes that he made for this speech are still in existence. Blacket was able to show the committee the sort of building that he intended, having to hand J.T. Emmett’s design of the Congregational College on Finchley Road, north of London. Blacket asked his friend, the artist Conrad Martens, to create a watercolour drawing from his plans and elevations. Although the plans can not be located, the drawing is owned by the University and was engraved to appear in a newspaper.

The building is in the Perpendicular Gothic style with a front of 125 metres (410 feet) broken at the centre by a tower of 27 m (90 ft), beneath which there is a lofty archway, and surmounted by large pinnacles. The façade is broken by two gabled bays to the left, and one to the right, the right side of the building terminating in the Great Hall. While the whole exterior of the building, with its glowing sandstone, battlemented roofline and array of glinting leadlight windows give an imposing effect on top of the hill, it is the Great Hall that is regarded as the finest part of the design. The interior is loosely based on that of the Great Hall of Westminster, having a magnificent hammer-beam roof and a large mullioned and transommed window at each end. The windows of the long sides are placed high above an ornamented course in order that portraits may be hung beneath them, except at the south western corner where there is a large oriel window. The building has many rich details including the angels, which are carved on every hammer beam. The glass, by the English firm Clayton and Bell, represents men of learning, and is said to be the oldest complete cycle of Victorian stained glass. The Senate is said to have asked Blacket to sign his buildings; the Blacket coat of arms are on a chimney on the south wall of the main wing, and his initials, ETB, are on the façade of the Great Hall.

Completed in 1861, the university soon became a tourist attraction; Anthony Trollope wrote home in 1874 that the Hall was “the finest chamber in the colonies”, and that he could remember no college of Oxford or Cambridge which possessed a hall “of which the proportions are so good”