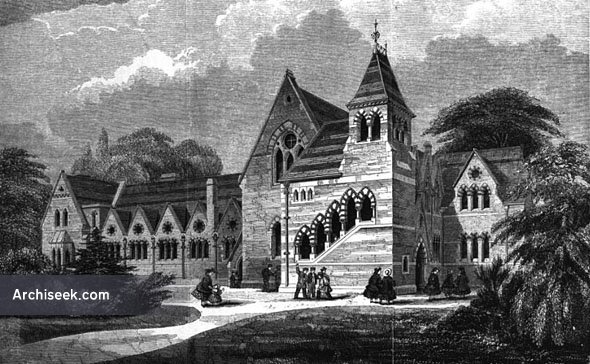 From The Building News, June 6, 1862: Our principal illustration this week represents some projected Church schools at West Bromwich. Messrs. Green and De Ville. of 36 Ormond Street, architects, say:””We propose to construct the walls of the building of the new red sandstone, with occasional bands and arches of coloured bricks or stone, and the dressings of oolite, the roofs being covered with slates of various colours. The schools are planned according to the requirements of the Committee of Council on Education, and are designed to accommodate 450 children. On the ground floor is placed the infants’ school, with a south-west aspect, accommodating 150 infants, and the girls’ school, with a south-east aspect, accommodating 150 girls, over which is a schoolroom for ISO boys, reached by a stone staircase in one angle, surmounted by a bell-turret. The infants’ and girls’ schools are divided by a double curtain, which allows of the two being thrown into one large room for assembling all the children at one time. AH three schools would have a separate playground, and adjoining the building is a master’s residence with a garden attached. The schools are provided with class rooms, and fitted up, warmed, and ventilated in the usual manner. The estimated cost of the buildings is about £2,000.