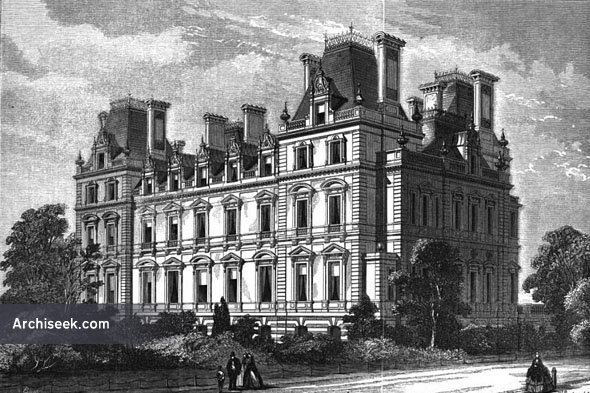 From The Building News, November 28, 1862: His Grace the Duke of Bucclengh is one of the few noblemen who still retain a mansion on the banks of the Thames. Notwithstanding the ill odour that the river has acquired, he has even had the courage to brave all consequences and build himself a new house there, of which we this week publish an engraving. The accommodation of the old building was altogether unequal to the requirements of the household. The rooms were small, out of proportion, low, and badly ventilated. The offices in the basement during high tides were frequently flooded by the overflowing of the river. This is scarcely to be wondered at when we find it recorded in an old history of Westminster “that a great part of Parliament Street is like the rest of the land hereabouts, an embankment gained out of the river.”

Every precaution has been taken in the new building to remedy this latter, as well as other defects. All the piles on which the old building was carried were drawn, and the holes or cavities occasioned by their removal filled with chalk. A layer of chalk, of considerable thickness, was then laid over the whole site. On this chalk, Portland cement concrete was laid, five feet in thickness, and, on the upper surface of this concrete, the foundation of the present mansion was commenced. The walls throughout are of brick, the external walls being faced with Portland stone. All the stone for this purpose, before worked, was submitted to the approval and selection of the architect or his clerk of works.

The most noteworthy points in the interior arrangement are the State rooms, saloon, picture gallery, and grand staircase. In constructing the various rooms, to prevent the conveyance of sound from room to room, the floors are double framed and pugged with cockle shells laid loose without lime; portions also of the building are fireproof. In anticipation of fire, a large wroughtiron water tank is fixed in one of the four mansard roofs. This tank also supplies the domestic offices. Considerable credit is due to the builders, Messrs. Holland and Hannen, of Duke-street, Bloomsbury, for the execution of the various artificers’ works, which have been carried on, without delay, under more than ordinary difficulties. During the strike, workmen were procured, at a considerable expense to the contractors, from various parts of England and Scotland. The mansion, when completed, it is anticipated, will cost £70,000. The arrangement of the exterior is seen in our view. The architect is William Burn, Esq., of Stratton-street, Piccadilly ; the clerk of works is Mr. Collins.

In 1917 the house was taken over for use as government offices, and a few years later it was demolished. The site forms roughly the southern half of that of the current main Ministry of Defence building in Whitehall.