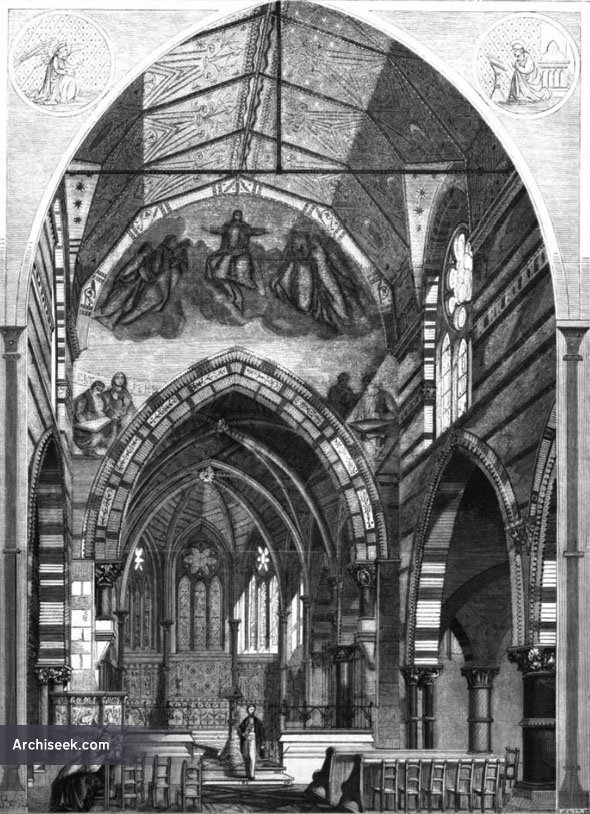 Part of an architectural ensemble of church, hall and school, this complex is now surrounded by a housing estate, rather than the urban environment it was built in. A tower marks the entrance into the complex which is finished in red brick with black brick embellishments externally.

From The Building News, May 2, 1862: The admirers of Mr. George E. Street have at length the satisfaction of seeing the metropolis adorned with one of his original and beautiful works. Hitherto, we have had to rest content with looking upon representations of them upon the walls of the Royal Academy and Architectural Exhibitions, or have been obliged to take a journey””well rewarded, we admit””away from London to look upon the churches themselves. We know not the cause of this apparent neglect of one of the ablest of our church architects. Wherever we light upon his skilful drawings or examine his buildings, we immediately recognise the individuality which he stamps upon them. He is one of the few who have studied Mediaeval architecture with real and marked advantage””not to give us simply a reproduction, but a further development of it. He is not satisfied with making a collection of fragments and fitting them harmoniously together, but he makes what in less able hands are hard, rigid features as pliable as clay in the hands of a potter. It is the freshness and life breathed into everything he touches, which, spite of faults, makes his buildings so interesting. We cannot read them at a glance, because they are not made from familiar stereotyped plates ; but we can with pleasure walkround, examining carefully every bit of detail, and, regarding them from every point of view, find with each step ever varying enjoyment.

Through the liberality, mainly, of the Misses Monk, daughters of the late Bishop of Gloucester, the new church of St. James the Less has been built, and Mr. G. E. Street was employed to design it. It has now been some few months consecrated and opened for service. We gave, at page 663 of our last volume, a detailed description of the building and its decorations. The interior is of red brick. The columns are granite, with free-stone caps and bases. Th font is of alabaster. The pulpit is somewhat over-charged with carving. On cither side of the altar are figures let into the stone in a sort of niello. They represent typical women of the Old and New Testaments. The ceiling is elaborately and rather too strongly painted. In the arch over the credence table there is a fine piece of sculpture in low relief, representing, grouped vine-leaves and corn-stalks. We must, however, refer to our former description for other details. We shall be glad if our view causes our readers to visit the church and give it that study which its beauties deserve.

The exterior, unfortunately, is so hemmed in by houses that from no one point can it be seen in its entirety. The tower springs boldly up from the ground, and is connected with the church by an arcaded porch. It stands like a stern sentinel, proud of its position, beside the building, and reminds us in this respect, as well as in some portions of its detail, of the finest of the Lombard towers. It is a pity that funds cannot be had to buy the adjoining houses, so as to effect a thorough clearance round this noble edifice. Meanwhile, we would suggest to all visitors to seek out a narrow court which leads to the chancel end of the church, and enjoy thence the best view which can now be obtained of the building. The full extent of the church cannot bo seen from it; but the tower, as there seen, groups very picturesquely with the apse and transept, and gives a good idea of what the church would appear if disencumbered from its belt of ugly houses. The contract has been most satisfactorily carried out by Mr. Myers.