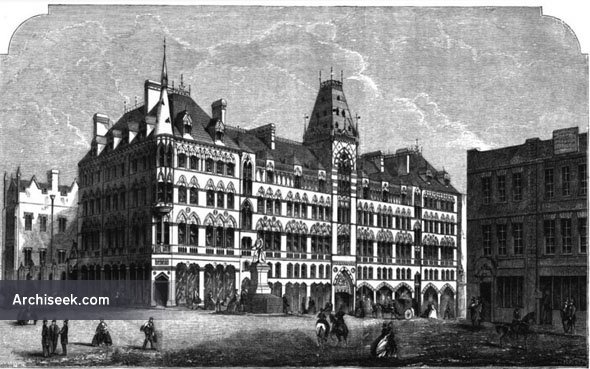 From The Building News, August 22, 1862: The Assembly Room is 70 ft. by 40 ft. and 28 ft. high, and is situate on the first floor over the Exchange in each plan; the principal entrances, however, vary in the situation. In plan No. 4 the entrance is from Stephenson Place, below the Exchange entrance, while in plan No. 17 the principal entrance is from New Street. ‘Ihere is no doubt that the Governors of the Free School would allow that portion of the passage next New Street to be covered over by a glass roof as shown, otherwise a temporary moveable covering may be arranged for as a protection from the weather, when the Assembly Room is used on public occasions. It will be observed in each case, most particularly in plan No. 17, that the Assembly Rooms, and rooms in connection therewith, are so ai ranged that they are separate and distinct from, and do not in any way interfere with, the offices on the same floor. By referring to plan No. 17 it will be seen the arrangement is most compact and complete; there are glass screen doors, which separate the passages and office landings from corridor round Assembly Booms: three entrances are provided to the Assembly Room “” one at the end near to Btairs, and two at the side in corridor. A gentleman’s ante or waiting room 22 ft. by 17 ft. 6 in. is placed opposite Assembly Room, with hat and cloak room adjoining, and water closets and lavatories contiguous. This room trill also be found very convenient for gentlemen to meet in prior to public dinner in the Assembly Room, or as a card room, upon the occasion of balls j a ladies’ cloak room is arranged at the end of first passage near entrance to Assembly Room, with retiring rcom and water closet, and lavatory connected therewith; adjacent to this room is also arranged a gentlemen’s dressing room, with water closet and lavatory. The orchestra, which is arranged for a full band, is approached by two small flights of steps. The Assembly Room is lighted by a handsome range of three-light windows, six in number; a borrowed light is also obtained from Assembly Room to corridor next ladies’ cloak and retiring room. The refreshment or supper room is entered from the Assembly Room, and also from the lobby, which communicates with the corridor round Assembly Room; it is 46 ft long and 16 ft. wide in one part, and 20ft wide in another part Provisions will be delivered to this room by a lift, which serves also for dining and other rooms. The dining room, which is immediately below the refreshment room, may also be used for the purpose of a refreshment or supper room, upon the occasion of balls; a stone stairs, connecting the two landings, water closets, lavatories, and nrinals are freely provided for in connection with these rooms. In plan No. 4 the Assembly and Refreshment Rooms are similarly situated, but the entrance and retiring ‘and other rooms in connection therewith are lomewhat different

Dining Rooms.””The (dining room in each mezzanine plan, No. 3 and 16, is similarly situated, and is the same size as the refreshment room; it is accessible by means of handsome stone stairs, approached from the lower entrance in Stephenson Place, the same being continued to the refreshment room, which room may also, if necessary, be used in connection with dining room; the lift and serving room adjoins dining room. Private offices are conveniently arranged on this landing.

Culinary Offices. “” The kitchen and other culinary offices are arranged on the upper floor over the dining-rooms ; the size of kitchen is 27ft by 26ft. ; ample light and ventilation is provided for in the walls and roof; there is a scullery adjoining the kitchen, and pantries, larder, coals, store, knife-house, and plate-closet contiguous to same. The suggestion offered in the particulars to architects, as to the prevention of the disagreeable smell arising from the cooking diffusing and penetrating itself over the building, has given rise to the idea of their present position. The lift is connected with each floor from basement to kitchen ; there is also a private stone stairs for this department Cellaring is provided for coals, beer, and wine, and a residence, containing living- and two bed rooms, is provided for the resident cook or superintendent of this department, on the four pair plans, No. 7 and 20, with stairs and entrance from lobby adjoining kitchen offices.

Masonic Room. “” The room, 40ft. by 30ft, which is proposed, we believe, to be erected for the convenience of Masonic meetings, is in each plan on the third floor and fronting New Street (see plans No. 6 and No. 19). There are two ante-chambers with water closets and lavatories connected to each; the Masonic Boom is approached by stairs entering at the upper doorway in Stephenson Place: in Plan No. 19 it is approached by the Assembly Room stairs and entrance from New Street; this arrangement will be found on examination compact and complete: upon the occasion of grand masonic meetings and dinners, immediate access may be gained to the assembly or dining room by the stairs and corridor round assembly room, without coming in contact or interfering with the occupants of offices. The Masonic room is about 18ft. high. 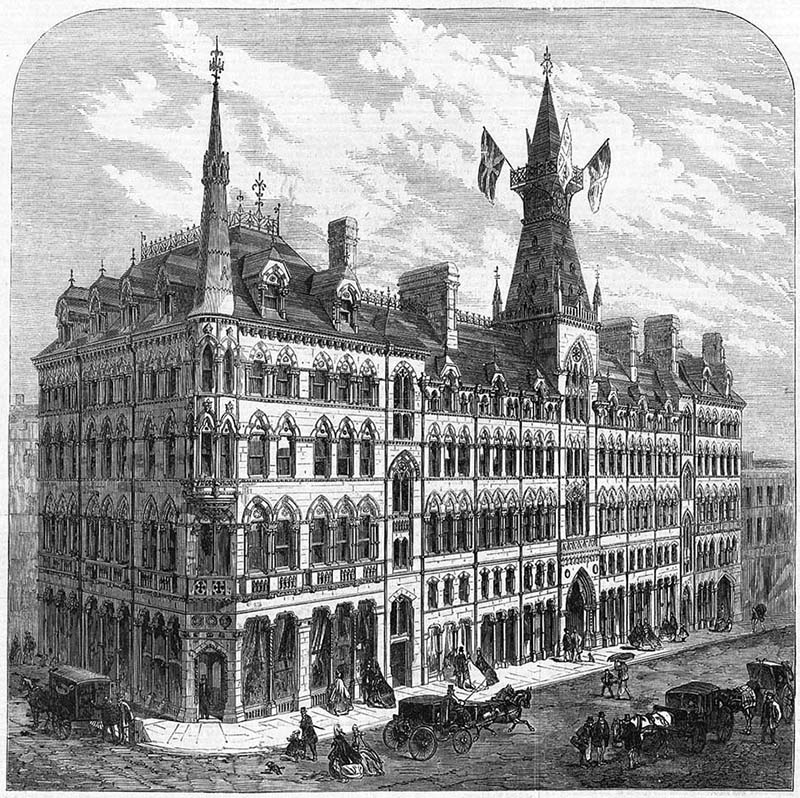 In the centre compartment of four-pair plans, Nos. 7 and 20, is arranged a residence, containing living and two bed rooms, with pantry, closets, &c., for the keeper of the hall. The remaining space for disposal, after arranging the principal rooms on the various floors, is divided into numerous offices of convenient sizes and suites. All the rooms and offices on the various floors have water closets, washstands, &c., attached; those in connection with the Exchange are approached from end door of Exchange opening on to lobby; the whole are well lighted and ventilated. Access is gained to the various floors by stone staircases ; winders at the angles have been carefully avoided, and in almost every case the landing crossing a window is avoided.

Access will be provided into all the roofs, which will be framed of wood and iron, and covered with slate, the Gothic design in band and patterns.

A room is provided iu the basement to contain a warming apparatus on Messrs. Hodens’ principle. Warm and cold air flues will be conducted to and from same, which will be connected to Exchange and Assembly room by ornamental cast-iron sliding gratings. Flues are also provided in thickness of walls to assist in removing vitiated air; these flues will be carried to ventilators in roof over assembly-room. All the offices and smaller rooms are warmed by fires.

General Construction. “”The floor of Exchange and entrance will be laid with encaustic and plain tiles and bands of stone upon brick arches, supported by cast-iron girders and piers; cast-iron girders will be introduced to carry all cross walls over shops. All the floors, coloured yellow on plan, will be boarded. The assembly-room floor will be carried on wrought-iron box girders, supported on columns, as shown; the interior of the separate designs will be carried out according to sectional drawings. The timbers and ironwork in the Gothic design will be exposed, the former stained and the latter painted. Plate glass will be used for all the windows in front elevations; each office has two large sash windows; the rooms and offices are so arranged that the difference in style need not interfere with the arrangement of plan in either case.