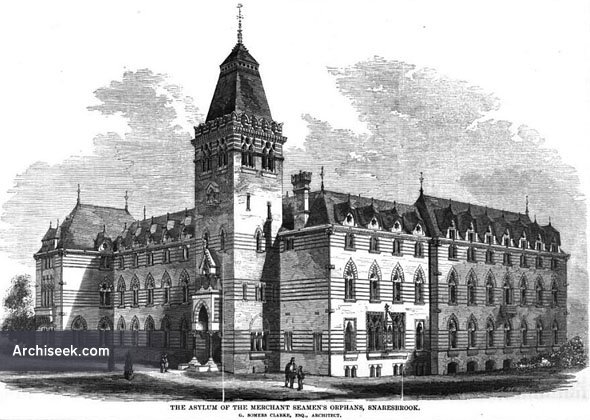 From The Building News, October 31, 1862: The Asylum of the Merchant Seamen’s Orphans is an institution founded for the support and education of the children of deceased and shipwrecked marines, for whom an asylum has recently been erected at Snaresbrook, from the designs and under the supervision of Mr. G. Somers Clarke.

The building, of which we give a general view, is constructed to accommodate 130 boys and 75 girls, and will be capable of further enlargement, to hold 400 children, when the funds of the charity arc sufficient to warrant the erection of i south-eastern wing for boys, a dining hall, and bead-master’s residence, without which some of the arrangements of the plan are only temporary and therefore necessarily incomplete.

The asylum is built externally of red bricks, made from materials on tho ground; the fronts being relieved by black Ewell lacing courses, and window heads and other arches throughout are also in alternate black Ewell cutters and red Ballingdon cutters. The general stonework is from the contractor’s quarries at Ancaster. The external walls of courts, and the internal walls of corridors, school-rooms, dormitories, kitchen, offices, &c., are faced with pale stocks made on the ground.

The south front of the building is appropriated ;o the boys, and the west to the girls.

On the basement is arranged a covered .playroom 84 ft. by 24 ft., facing the south front, and immediately under the boys’ school-room, lavatories, urinals, water-closets, and a boot and shoe room are provided adjacent, and to which easy access is obtained by a corridor 8 ft. wide, communicating by a staircase with the ground floor of this wing. Under the kitchen offices are a range of cellars and store rooms, with a distinct staircase from the girls’ wing. The washhouse and engine-house are also on this floor, and have a separate staircase by which communication is maintained with the kitchen corridor.

The ground floor has two main entrances; the principal one in the tower, and another in the jirls’ wing. The former has a rich and elegant porch designed after the type of those common in Northern Italy; the monolith””shafts of which are of Devonshire marble, with bases of red Mansfield stone. The base of the south column of this porch was laid by his late Royal Highness the Prince Consort, in June, of last fear. The entrance hall is 17 ft. by 17 ft., and s divided by an open arcade of two arches resting on throe-quarter Devonshire marble shafts, and s vaulted in red hexagonal coffered bricks and Ancaster stone-rib mouldings. The principal staircase is 21 ft. by 17 ft., the steps of which are of Portland stone, and the floor is hud with Minimi’s encaustic tiles.

The girders of the ceiling of the reception or committee room are cased with pitch pine, and an ornamental screen across the room, supported on columns, is executed in the same material; ;he chimney-pieces are of marble, inlaid with majolica tiles.

The boys’ school-room is 84 ft. by 24 ft., the floor being constructed of half brick rings carried on iron girders 12 ft. apart, and the spandrels fitted in with concrete; upon this the floors laid; the walls of all the school-rooms are faced with grey stocks, and the girders cased with pitch pine. Rooms are provided in this wing for the master, under-master, and secretary.