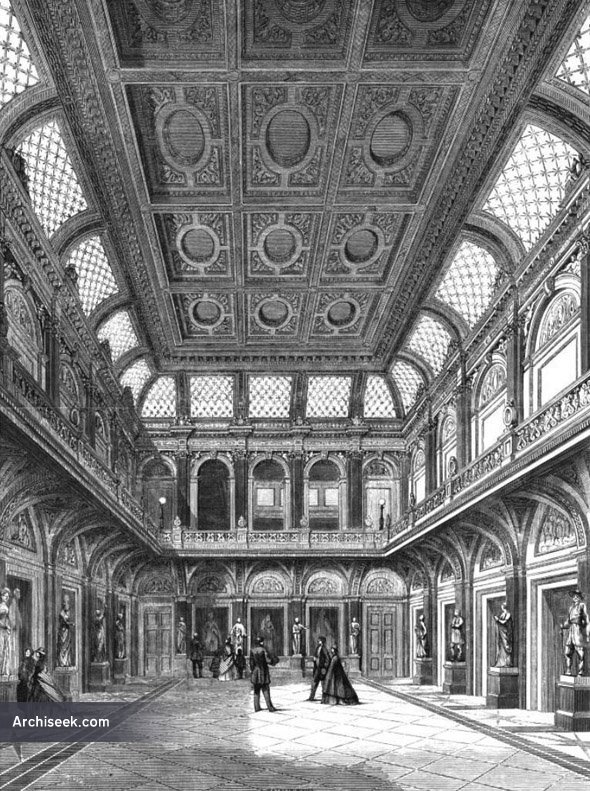 “In another volume we gave a view of the exterior of Halifax Town-hall, then about to be built; plan of the principal floor; and some descriptive particulars.* We now add a view of the interior of the hill, proper, a fine apartment in the Italian style. The building, it will be remembered, was designed by the late Sir C. Barry, R.A., but has been completed, under the superintendence of his eon, Mr. E. M. Barry. As will be seen iu the engraving, the ceiling is divided into compartments by broad moulded bands, having the laurel or oak leaf rendered upon them. In the centre of each of these compartments is a small dome for lighting the ceiling. In the spandrels, around each opening, is an enriched raised ornament, upon a coloured ground. The body of the hall is lighted by the coved portion, being all of glass, divided into bays corresponding with the bands in the ceiling. In the cornice, at each division, is a small group of figures, very well modeled. Between the pilasters below are semi-circular arches, enriched with the initials of the sovereign, and the letter H. for Halifax. The caps to the pilasters are also well moulded. The gallery, which goes round the ball, and which is fitted with seats, has a balustrade, in carton pierre, from the designs of Messrs. James Mabey & Sons, of Westminster, who executed all the bas reliefs and caps, under the immediate supervision of the architect. Under the gallery are lunettes, containing the arms of different towns, supported by figures, of Commerce, Industry, &c, in bold relief. At the foot of the pilasters, beneath the gallery, are pedestals for the reception of statues. The room is 50 feet long, 40 feet wide, and about 40 feet in height. The floor is of Mintou’s encaustic tiles, in a simple pattern. We should have mentioned that tho balustrade to the gallery is gilded. The accounts of the building have just been presented to the committee, and show that the cost of the building as certified by the architect, is 32,000.” The Builder, November 7 1863.